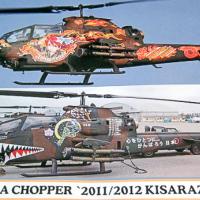 I flew the AH-1 Cobra for 15 years, and to say that I’m intimately familiar with it would be an understatement. I love this helicopter and flew it in combat and as a maintenance test pilot. If the Army still had it in the inventory, I would still be in.

The Hasegawa 1/72 scale AH-1S was released a few years ago, and at the time was, and still is, the most accurate AH-1S. Before I go too far, let me explain the difference of the AH-1S that always comes up. The AH-1S was a standard by which all Army Cobras were to be built to. It basically allowed the shooting of TOW missiles and had the T55-L-703 engine. There were FOUR versions of the AH-1S. The first one was very similar to the AH-1Q, had a rounded canopy, an M28 turret system consisting of one 7.62mm minigun and a 40mm grenade launcher, and was simply called the AH-1S. Then came the AH-1S (Production) model which changed the canopy to a more facetted, squared-off look in an attempt to defeat hand held surface-to-air missiles. Other than the canopy it was essentially the same. By then the Marines were having great success with their 20mm equipped AH-1Js, so the Army elected to increase the nose armament to the same M-197 cannon. This created the AH-1S (ECAS), which stood for Enhanced Cobra Armament System. Then, because the threat kept evolving, the Army made the AH-1S (FMC), or Fully Modernized Cobra. This version of the Cobra featured the Air Data System, Rocket Management System, Helmet Sight Subsystem, IR suppressor, and Airborne Laser Tracker. Confused? Imagine the confusion this caused to the mechanics, as all the aircraft were included in the same parts manual with an applicability code. This caused major problems of ordering the wrong parts.

Overseas customers, such as Japan, still call their Cobras the AH-1S, but they differentiate them with a Step designation. The AH-1P is the Step I, the AH-1E is the Step II, and the AH-1F is the Step III. Okay now that we know what is in the box.

Hasegawa initially released the AH-1S as a single kit. This special edition is a TWO kit packaging representing two aircraft appearing at two different years of the Kisarazu Airshow. The sturdy box includes full color photos of both aircraft, both of which get your attention as they are quite colorful. The Japanese painted their aircraft in special schemes for the airshow, and in typical Japanese style, these aircraft feature anime characters. It is an interesting contrast to the camouflage scheme as the anime is in full color.

As I mentioned previously this special boxing contains TWO kits, and they are molded on 14 dark green sprues. There are two clear sprues and two poly cap sprues. The parts count is relatively small in this scale. All the sprues are crisp and perfectly formed. The panel lines, besides being petite and precise, are actually positioned perfect. The panel lines tend to be a little faint on the belly of the model, but certainly nothing too bad. There are perfectly sized screws and fasteners as well. The tailboom features some exquisitely rendered rivets. Even the three panels on the tailboom are asymmetrical like the real thing. This is often missed by model makers.

The decals are absolutely in-your-face colorful. There are more colors on there than I can ever remember seeing on a decal sheet. The decals don’t look to be thick as is the norm for Hasegawa decals. I’ve used ‘thick’ Hasegawa decals before, and I will say that they work as well as some of the best decals in the world. They may look thick on the sheet, but they are thin and perfectly in register. What is nice is they even give you extra decals for different aircraft and some just fun decals.

The instructions are typical Hasegawa pictures. Simple, easy and effective. There is a color breakdown on the last page for both aircraft.\

The build starts in the cockpit, as usual. The cockpit is simple in its construction and pretty complete. The side consoles and instrument panels are replicated in decal form. While I had my doubts about this, they worked out quite nice. The only thing really missing are the seatbelts and shoulder harnesses, which I added out of tape, however in this scale they would have been nice as decals. The Helmet Site Subsystem is not included, but in this small scale I don’t think it would be noticeable. The entire cockpit is flat black. Some minor color can be added here and there to make it pop. When installing the cockpit use caution to make sure that everything lines up or you will have issues with closing up the fuselage.

Before you know it, you are closing up the fuselage. Hasegawa doesn’t mention it but there is a need for some weight to prevent a tail sitter. I used a small fishing sinker attached with epoxy. Don’t forget to open up the indicated holes and to install the poly cap for the tail rotor. Be careful, as the poly cap falls out easily. Thank goodness they give you extras. The fit of the fuselage was very good, with just a smidgeon of putty needed on the nose.

The wings were built up, and they fit fine with a little bit of putty on the ends. I wish they would have molded the end piece as a separate part for you to add to the wing. The wing armament went together beautifully. I did not add the TOW missiles at this time, preferring to add them at the end of the build.

The landing gear fit well. I would have liked the choice of a faired or unfaired crosstube. US Cobras don’t typically have fairings on them; however, I could live with the kit’s faired crosstube.

The hardest part of the entire build was the IR suppressor. Getting the panel lines to line up was a pain. I finally got it to where I was happy enough with the results.

Adding the canopy was very straight forward, and the fit was near perfect. I masked it off with Tamiya tape, and with that I was ready to paint. I did some additional masking of the doors to allow the yellow surround to be seen when the masks were removed. The canopy area was sprayed in flat black. The masks were removed and yellow was added. Finally a coat of Alclad Grey Primer was used to check for flaws. I fixed the few that I had and re-primed.

I painted some antennas and panels flat black, and masked them off. Then some pre-shading and modulation was done to the model. That means that a dark color was sprayed in the shadows and a lighter color was sprayed on the highlight areas.

I decided that I didn’t want to use the Japanese paint scheme, which is quite nice, as I couldn’t bring myself to put the anime on a Cobra. I elected to use the Werner’s Wings AH-1F "Last of the Army Cobras" decal sheet (WW Decals 72-01) to depict the last Cobra that I flew to England in 1996.

This aircraft required thin coats of Model Master Enamel US Army Helicopter Green. It was well worn after serving six months in Bosnia during the winter. I normally use the acrylic because it is the most accurate color, but in this case I decided that the scale effect would look better in the enamel, which is greyer and has a more scale appearance.

The man rotor blades were painted flat black and satin black. There is no wear pattern on the main blades as they were composite with an estane (rubber like) leading edge. The tail rotor was primed in grey, painted aluminum, then zinc, and finally Olive Drab. This was done to aid the weathering process. After it all dried, I lightly sanded back the leading edge to reveal the undercoat just like the real thing. Tail rotor blades could be olive drab or flat black. I elected for olive drab as the tail rotor blade that I have at home is olive drab.

I removed the flat black masks and a coat of Alclad Aqua Gloss was added over the entire model in preparation for the decals. I used a combination of Werner’s Wings and the kit decals. Can you tell which are Cartograf and which ones aren’t? Me neither. The Hasegawa decals performed flawlessly. I set everything with Solvaset. A coat of Alclad Flat sealed the decals and prepped for weathering.

Weathering was done with Mig Pigments, SIN Filters, and Tamiya weathering powders. A silver pencil was used to replicate some chipping. Bosnia was very muddy, so I weathered it accordingly. I was happy with the results.

The masks were removed from the canopy and the canopy polished. I painted up the ALQ-144 ‘Disco light’ with Alclad Candy Yellow and Red. It was added to the engine cowling. The TOW missiles, both rotors, and 20mm cannon were added. Some minor touch ups were added. Clear red and green were added to replicate the lights, and the model was finished.

The Hasegawa AH-1S is the best AH-1S in any scale. That said, is it perfect? No, but it is very close, and is a very enjoyable and quick build. It would be nice to see the unfaired landing gear, as well as an M-130 chaff dispenser, and some other minor things. That said, I loved this build. It was quick, fun and represents the last version of the Army Cobras. Now whether you like the anime characters on your Cobra is up to you. If you elect to do something different the Werner’s Wings decals work well. There are actually two of the special edition boxings available now, one for the 2013 and this boxing for 2011/12. Both contain two kits and feature unique anime artwork that isn’t available any other way. I bought a few more of these kits, and I don’t even like to buil d in 1/72 scale. Like I said, this is the best AH-1S (or AH-1F) in any scale. Great job Hasegawa.

Highly recommended by a Cobra pilot.

Thanks to Hobbico and IPMS/USA for the review copy.

Finished Model - Right Side
Previous Next