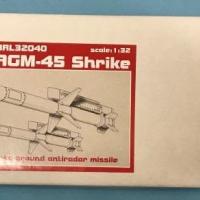 IPMS/USA appreciates the continued support of Jan at Hauler/Brengun for supporting the IPMS USA reviewer corps with yet one more of his unique and useful products!

Today’s review is a pair of AGM-45 Missiles and Launch rails from Brengun.

What you get: Two Missiles, launch rail adaptors, decals (YAY), and diorama parts. The diorama parts are the transport spreader bars in PE for the aft Missile launch lug, and the electrical umbilical’s for a pre-loaded missile. Also included are the missile motor nozzle rings.

The missiles are well detailed with appropriate screw holes and scribing. The missile forward wings are separate, which allows them to be displayed in “off-line” condition, or in a missile transport coffin with the wings off. (This is not included).

Assembly was uneventful. The wings require a bit of pour flash to be carefully removed. Be aware the resin is not brittle and cuts/sands/drills well. The wings can be assembled as a push-fit, but I recommend a bit of thin superglue to hold them in place.

The aft fins needed a bit of careful knife work to clean up the pour point, but afterwards were very well rendered. I drilled out the missile body to facilitate painting and make it easier to install the engine nozzle rings. No flying away if the glue didn’t grab, as the nozzles just sat on the end with the cocktail stick capturing the ring if it popped off. Once the superglue cured, they were in place.

The mounting rails fit the missile rails nicely and I opted to drill a hole through the launch rail and into the missile with a length of coat hanger wire remaining exposed, in order to facilitate using the pin to hold the assembly to the launch pylon, and making for a more durable fit.

Painting was simple; gray primer to fill scratches and check for too much CA, followed by Tamiya white spray cans primer. This was followed by Krylon’s gloss white over all, and allowed to cure.

Decals behaved very well, and did not silver. I went ahead and micro-soled them, and they were held firmly in place. A light mist of satin gloss, and done. These decals seriously made a big difference in the final appearance of the missiles… a trend most manufacturers have been following for a few years now. It is worth the extra time and struggle to get them in place!

I was very pleased to have been the reviewer of this AGM-45 set, as it is a solution for my F-105 “Wild weasel”. The Trumpeter Shrikes have the missile front wings mounted extremely too far to the rear. (As a note, the Hobbyboss 1/48th F-105G is a downsized computer copy of the 1/32nd Trumpeter kit, and this error is prevalent on their Shrikes too…) 1/48th scale is easier to source Shrikes for. Brengun got the whole assembly correct!

End of review notes: No problems, an excellent evening of light detail work, and another couple of hours for decals and finish paint (most of it waiting for paint curing).

Full marks for this item, thanks very much to Jan for providing the set and thanks to IPMS for the opportunity to review them!

both assembled rt side