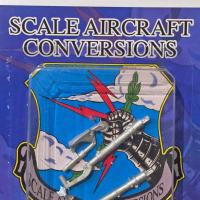 Since my early days as a lad building and enjoying model aircraft, the A6M Zero has been on my short list of favorite propeller drive fighter aircraft. Recently, I acquired the new Hasegawa A6M5c kit and thought I would give the SAC metal gear set a try. My personal opinion regarding heavier 1/32 aircraft and smaller scale kits with fiddly landing arrangements, metal gear is the only way to go. Metal gear is more forgiving and has the wonderful ability to be gently adjusted, unlike their polystyrene relatives. Please be aware like any other molded product, it is helpful to clean the parts and prime prior to painting. The other important point is that standard model cement will not work with metal parts and another glue such as a cyanoacrylate glue (super glue), Epoxy glue, or a PVA (white glue) will be necessary. I should point out, another nice touch by SAC is that the attachment nubs are coded with an “L” and “R” to help the builder get the right leg in the right hole.

Scale Aircraft Conversions supplies the builder with both the left and right main gear legs, two torsion links, and the tailwheel assembly. It will still be necessary to utilize the kit parts for the gear door cover attachments, as well as the kit provided brake lines. Starting with a side by side comparison everything seems up to scratch. I did notice a bit of flash on the torsion links as well as a little on the gear servicing valve on the right gear leg. This flash is nothing a quick swipe of the file shouldn’t solve. My only niggle was that the same tiny servicing valve near the top of the gear leg seems to lack the fine detail of the kit part. Other than that, the two parts appear identical. I’m not sure why this is, as the photo of the gear on the SAC website show the service valve to exhibit all the fine detail of the kit part. I don’t want to forget the tail steel assembly as it likewise looks to be a good match for the kit part.

My next and last comparison was to install both the kit leg and SAC replacement leg into the kit wing receptacles. First the kit part. The kit plastic was very snug and I was a bit concerned about the amount of force required to push it in so I opted to gently file the kit gear legs with my jewelers file. Next up to bat was the metal gear from SAC. Unfortunately, I found the opposite to be the case for the metal gear. In my opinion, the gear was just a bit too loose. With the gear leg installed it wobbled on all axis. The lower end of the leg (where the wheel mounts) moved in an approximate half inch diameter circle with the gear leg installed in the wing. Certainly, this is not a major problem, it will require the builder to take a bit more time and effort to assure the alignment of the gear legs.

Again, I want to thank Scale Aircraft Conversions for providing their metal landing gear for review and the IPMS USA for allowing me to review their product.