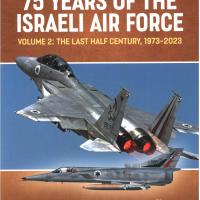 This is the second volume of two published by Hellion covering the history of the Israeli Air Force from its founding to the present. As with other Hellion volumes, it follows an established format. Using a chronological format, the narrative begins where the last volume left off. The text begins with the end of the Yom Kippur War and ends in 2023 with a little bit of forecasting into the immediate future. The book is heavily illustrated with black and white photos. As with previous volumes, it has a series of color profiles of aircraft and a slim selection of color photographs. They also have an extensive bibliography and foot notes for those of you who would like to continue reading on the topic.

The narrative begins at the end of the Yom Kippur War. In the aftermath of the war, the United States became the Israeli Air Force’s (IAF) chief supplier of aircraft with the F-15 and F-16 as well as stand-off weapons being added to the Israeli arsenal. While arms sales were subject to the vagaries of American politics, the addition of new American aircraft gave the IAF capabilities that allowed them to strike an Iraqi nuclear reactor in 1981. By far the most action the IAF saw was in Lebanon. Between the Civil War between the Muslim majority and Christian minority as well as the issues related to the Palestinian Liberation Organization (PLO), the IAF remained busy. While not facing the issues of planning air superiority campaigns of 1967 and 1973, the IAF was able to dominate the skies over the battlefield, supporting the army and keeping the  Syrian Air Force at bay.

In the 1990s, the IAF continued to evolve. The issue of cost of aircraft and professionalization figured mightily. I appreciate the fact that the author pays attention to the issues of procurement, modernization, and the professionalization of the IAF. While there is no argument that the IAF was the best in the Middle East, they were a small country with a limited budget and had to make procurement decisions. The Americans provided older F-15s and F-16s and the Israelis made enhancements, adding updated avionics and other upgrades that not only extended their lifespans, but capabilities as well. A mention is made of the patience that they displayed in not intervening in the Gulf War, even with Scud missiles falling on Israeli cities.

The narrative does bring the story to the present. There is mention of the Israeli nuclear capabilities, but not much is made of it since there is limited public information. Similarly, the author does pay some attention to the modest Israeli space program, a welcome addition to any work on the IAF. The movement toward asymmetric warfare, primarily against Hezbollah, the IAF once again showed their expertise in ground support of the Israeli Army. Unfortunately, as skilled as the IAF is, the cost of maintaining modern jets is prohibitive. In recent years, the number of aircraft in service has shrank.

When read in conjunction with the first volume, this is a concise summary of the Israeli Air Force. Volume 2 does a good job of mixing campaign history, procurement issues, and changes in policy. While I appreciate the higher costs of printing when you use color, it would have been nice to have more color. That being said, this is a great addition to the series.