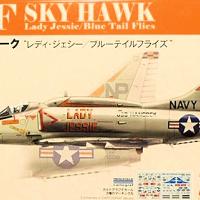 Platz Hobby currently produces 334 kits in 1/144 scale, and in addition to their F6F-3 release, I was fortunate enough to receive this two-plane kit for review. In addition to the parts for two aircraft there are markings for three different planes included. Construction was quick, and the detail is very good for this scale. Modelers familiar with working with small parts should not have issues building this release, and I would highly recommend it.

For those not aware, the Skyhawk started life as a fighter design, but as the US Navy had other aircraft being looked at for this role, it was suggested that Douglas continue the design as an attack aircraft. The specifications were for the plane to be able to carry 2000 pounds of weapons (including nuclear), have a combat radius of 345 miles with a top speed of 500 miles per hour, and a maximum takeoff weight of less than 30,000 pounds. Ed Heinemann responded with an aircraft that had a flight radius of 460 miles with a top speed of 600 mph, and a gross weight of only 14,000 pounds. The preliminary mock-up was inspected in February 1952, and Douglas rolled the first XA4D-1 out of the El Segundo, California plant in February 1954. The Skyhawk received several nicknames during its career including, “Heinemann’s Hot Rod”, “Bantam Bomber”, “Kiddiecar”, “Scooter”, and “Tinker Toy Bomber”.

This release from Platz contains three light gray sprues along with one clear sprue for each plane. The decals are made by Cartograf and provide the famous “Lady Jessie” markings worn on the number 1 plane of the VA-164 Ghost Riders in 1969 and 1972 as well as a Blue Tail Flies plane in 1969. The “Lady Jessie” markings were first worn on squadron plane 406 flown by Commander R.C. Perry to honor his friend and former employer who sent care packages to the squadron from her casino. After Perry died in combat (in a different plane) and 406 was lost in combat (with pilot Lt. Commander Barr), the name was carried on the squadron Commanding Officer’s plane (401).

Construction is straight forward, and I did not need to use any filler on the seams of these planes. While there is no control panel included, it would be very difficult to see once the canopy is in place and the frames are painted. I did have to play with the fit of the canopy a little, but this was not a daunting task. I also had to replace the forward antenna on one of the planes as I managed to break it off during construction. My one building tip is to add some weight to the front of the plane prior to gluing the fuselage halves together (probably behind the cockpit rear wall).

I used Stynylrez White primer for the underside and control surfaces and Model Master Acryl Gloss Gull Gray for the fuselage, wings, and canopy. The gun barrels received Scale 75 Black Metal as did the tip of the refueling probe, the landing gear door edges are Vallejo Red, the engine exhaust and refueling probe end (excluding the tip) are Vallejo Natural Steel, and the surface above the exhaust is AK True Metal Gun Metal. Decals settled just fine with Micro Set over an Alclad Aqua Gloss finish (I still applied a coat of Micro Sol out of habit), and I sealed the planes with Alclad Light Sheen.

My hits for this release are the level of detail for the scale, the clean moldings and tight fits, and the great markings. Even though two of the markings are for the same plane, there are clear differences between 1969 and 1972. I liked the way that some of the decals included multiple individual markings as it would be very challenging to add each one individually in this scale.

My only real miss would be the failure to mention adding some weight up front to keep the nose of the planes down. I should have known better, but honestly did not think of this until I was airbrushing the white primer. I corrected this by squeezing a lead fishing weight into a shape that would fit in the back end of the plane as I left off the exhaust nozzle during painting. While not really a miss, centerline fuel tanks and loads for the pylons would have been a nice touch. I would also add that technically the forward slats fall forward when an A-4 is parked, so the planes represented in the kit would be in flight, but there is no option for a pilot to represent this.

On a side note, I did not catch that the Blue Tail Flies marking for the tail goes above and below the tail control surfaces. As I painted the planes with these in place, I had to cut a slit in the decals to get them to fit correctly. Of course the better approach would be to place the decals and then add the control surfaces afterward.

As mentioned up front, I would highly recommend this kit to modelers wanting to add a couple of A-4Fs to their 1/144 collection, especially “Lady Jessie”. Modelers with experience in working with small parts should have no issues with building this kit and adding the decals.

I would like to thank the folks at Platz Hobby for providing this kit to the IPMS-USA Review Corps for assessment, and to Phil Peterson for leading the Review Corps, and allowing me to perform this review. I would also send out kudos to all of the folks behind the scenes at the Review Corps who help John with his efforts, and as always, my sincere appreciation goes out to all the folks who take the time to read my comments.

Box Back and Markings