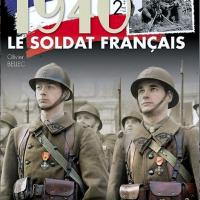 Seventy-one years after the French capitulated to the Wehrmacht in the summer of 1940 the French Army still seems to the butt of jokes. Regardless, the campaign still generates a great deal of interest in the academic and hobby community. With Tamiya’s release of the Char B1bis and the UE Armored Carrier, there is still a tremendous amount of interest in the modeling community for French subjects.

There are a fair number of French language reference materials if you know where to look. It just so happens that Casemate Publishers has increased this number by one with the recent release of 1940, the French Soldier Equipment, Weapons, and Material. Casemate Publishers carries a variety of publications from the French Company Historie & Collections. The subject of this review is the second volume of a compendium of uniforms and equipment of the French Army in 1939-40. Volume one concentrated on uniforms; volume 2 two follows up with personal and troop equipment. Keep in mind that this series concentrates on infantry uniforms and equipment. If you are looking for photographs and reference information on French armored vehicles and fortifications, you will have to look elsewhere. Luckily, Historie & Collections does cover fortifications and tanks in other works. They recently completed a five volume history of the Maginot Line and a volume on Char B1bis. These are available directly from the company.

The book is really for collectors and features a wide selection of equipment; nearly 844 photographs. It becomes apparent looking at the photographs and reading the text, units used a mixture of equipment and weapons that dated to World War One but were in the process of changing over to modern equipment. In 1935 newer equipment was issued and modified again in 1937. Using contemporary sources such as manuals and official bulletins, the reader gets a good idea of the bits and pieces of field equipment all fit together. Contemporary photographs show, however, once in the field, there was a great deal of mixing and matching going on. The text and captions are in French but with the help of an online translation application and a good French dictionary, it should not be too difficult to read the captions. The biggest issue is finding the right English word to correspond to the French military term.

The book is divided into eleven sections, each covering a specific field. The breakdown is as follows:

Each section features full color photographs of vintage equipment. There are apparently no reproductions on display; these items are the real McCoy. Male models wear the equipment to see its relative position on the body. For the modeler, in particular those of you who do figures, the book is very helpful in finding the right colors and arrangements of field equipment. Don’t let French text steer you away from this reference, it is a vital for anyone who appreciates the French Army in 1939-1940.

A thank you to Casemate Publishing and to IPMS/USA for this review sample.