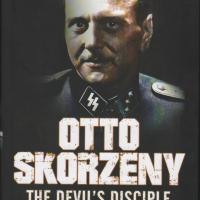 Osprey Publications, the prolific publisher of books related to nearly every aspect of military history imaginable, has in recent years been branching out into more traditional history works. This work is a critical biography of Otto Skorzeny, the man who rescued Mussolini from captivity. The author, Stuart Smith, is a trained historian with a career in business. Using original records and a variety of sources, Stuart has put together a fascinating portrait of a man whose entire career was largely built on one exploit – rescuing Mussolini from captivity in 1943. As his actions in the post-war would indicate, he was also an unrepentant Nazi.

Stuart paints an unfaltering portrait of Skorzeny. He was a superb opportunist and self-promoter who happened to be at the right place at the right time. In his military career, he demonstrated bravery and steadfastness in sticky situations, but was otherwise unremarkable. Much of the book concentrates on his exploits during the war. Trained as an engineer, his transition into the SS was rather unremarkable, until he caught the eye of senior leadership after volunteering for a commando unit. The bulk of the book covers his career with the SS and its various commando organizations.

While Skorzeny was able to track down Mussolini’s location, his own recounting of the raid was fiction. Skorzeny was present, but the troops who accompanied him, did all of the heavy lifting. Given Skorzeny’s undoubtable charisma and charm, the propaganda film crews that accompanied the mission were drawn to him. Tall, dark and handsome, with a prominent dueling scar on his face, it is not a surprise that film crews and reporters were drawn to him. Given his uncanny ability at self-promotion, he caught the attention of Hitler and the higher echelons of the SS and was given the role of leading the SS commando organization until the end of the war. As a man of action and ideas, he left the real work to a cadre of trusted administrators and staff. For the remainder of the war, in particular after the July 20 assassination attempt on Hitler’s life, Skorzeny was trusted with a mix of missions. Given that the Germans were on the ropes, in particular from mid-1944 onward, his missions were mostly to prop up the Nazi regime, such as installing a loyal government in Hungry when the existing government wanted out of the Axis alliance.

By far his most notorious action was Skorzeny’s participation in what would be known in western circles as the Battle of the Bulge. Using commandos proficient with the English language, dressed in American uniforms, and utilizing captured equipment, it was hoped that they would disrupt rear areas and provide reconnaissance for the armored spearheads advancing to the Meuse River and beyond, the operation went against international law which prohibits soldiers masquerading as others. While the operation created havoc behind American lines, much more than the plan had imagined, it did not meet its objectives. Moreover, since it was a false flag operation, managed by the SS, Skorzney was complicit in war crimes. Loyal to the Nazi regime to the last, he was able to surrender to the Americans in Austria and escape attention until he was charged with war crimes related to his actions in the Battle of the Bulge. While not complicit in the infamous massacre of American soldiers at Malmedy, he was technically liable for his role in false flag operations. Using his accustomed bluster and a weak case presented by the prosecuting attorneys, he escaped a guilty verdict.

Escaping from further prosecution, using his connections and the common sense of his wife, beginning in the mid-1950s, he was able to build a profitable business, but was involved in right wing and neo-nazi intrigue for the rest of this life. The author pulls no punches and casts down Skorzney’s reputation. He used his charm and charisma and knack at self-promotion to build a career in the Nazi regime and in the post-war world. He was a dangerous man in terms of his unrepentant views, but his historical reputation is hollow. Stuart paints a highly critical portrait of a man who does not deserve any of the kudos that were heaped upon him. Writing a biography of a man whose reputation was shaped by bluster and fabrications is, admittedly, difficult. Stuart does an excellent job cutting to the chase and telling an unflattering portrait of a man whose reputation is not deserved.

My thanks to IPMS and Osprey Publications for giving me the opportunity to review this book.