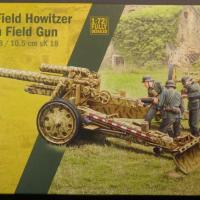 The 150 mm SFH18 Howitzer was widely deployed by the German army on all the key fronts during World War 2. Developed in secret, during the years limiting German rearmament under the conditions in the Treaty of Versailles, when Germany began their rearmament in 1933, it was a fully functioning design ready for immediate deployment. Interestingly enough, its first combat use was by the Chinese National Revolutionary Army in the Second Sino-Japanese War. The SFH18 had a simple and reliable design and a maximum range of 13.5 km. The gun and its limber could be separated and towed by horses, or more commonly by a half-track. A less common 105mm version was also developed and shared the same carriage as the 150mm version.

Italeri’s new tool design of this German artillery piece is a very nice offering. Since the 150mm and 105mm guns both shared the same carriage, the kit provides parts for both weapons, giving you the option to build either version. The kit also includes the separate limber, allowing the gun to be built in a firing or traveling version, and it includes five figures and some ammunition to allow the modeler to build the kit as a small diorama.

The instruction manual is nicely laid out, with clear instructions and drawings. The kit allows you to build the model with fully functioning traverse and elevation operations, as well as being able to put the legs in a firing or transport position.

The build starts with the gun barrel, and as mentioned you get two options here. The 150mm or the 105mm barrel. Both barrels are 2-part pieces, with the split down the side, so you are going to have to deal with a seam for either choice. From there, the build goes by subassemblies. The gun, the carriage, the legs, and finally the wheels. Each subassembly is well detailed, goes together well, considering how small some of the parts are, and has some very nice features. I was concerned that some of the small levers or gears would be tough to get off the runner due to some oversized runner gates, but everything came off clean and with little need to clean up. The elevation assembly has a particularly interesting feature on it, with a working 2-part pneumatic cylinder set up. When I was assembling it, I thought this is never going to work, but I’ll be danged, if it didn’t work perfectly.

The kit comes with a small set of decals, and painting options for 3 versions, 2 of the 15cm version, and 1 of the 10.5 cm version. The painting instructions are simple, and FS codes for the colors which keeps color choices simple.

Now, for the figures. The kit includes 5 figures to represent the crew that would operate the gun. In actuality, the gun would have had a crew of at least seven men to serve it. Like all non-specific figure sets, this one includes the standard “guy pointing”, and since it’s a big gun, you get a guy holding his ears. The figures themselves are a bit misshapen and include a mix of faults, like lots of flash, blob-like facial features and parts of their bodies being out of scale, like the guy holding the map with massive feet. If you want to pose this one with some figures, there are probably some better options out there.

Regardless of the state of the figures, this has to be the nicest 1/72 version of this gun on the market. I generally don’t even build artillery pieces, but I enjoyed this build which went together easily and rather quickly. Due to the small and intricate nature of some of the parts, I would recommend this to someone with a little more experience, or a newer modeler looking for a challenge.

Thanks to Italeri, MRC, and IPMS/USA for providing the review sample.