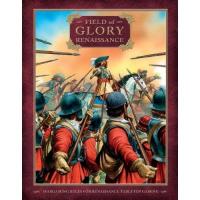 I’m not a war gamer, but I’ve been curious about it for a few years now so I jumped to the opportunity to review a war gaming book.

Fields of Glory is a series of war gaming books oriented to the ancient and medieval ages. This current book is the first of the series expanding into the renaissance era and as such is the rulebook.

The book has a historical introduction to the military doctrine of the renaissance era including pros and cons of different military formations of the time (tercios, keils, cavalry, etc).

Then the book moves into what is needed in order to be able to play, before diving into details of troops, battle groups and in general, the rules of the game, including movement rules and combat phases like impact, maneuvering, shooting and melee. Each rule is demonstrated with examples, which makes understanding and learning of the rule much simple.

Finally, there are nine appendixes in the reference section, covering among others, battlefield terrain visibility, army composition, set up rules, etc.

This book is independent of previous books in the series -ancient and medieval ages-, but it often makes reference to an accompanying army book, so you will probably need both in order to play the game unless you just use “starter armies”.

The book binding is strong (hardcover) to ensure durability, as it will be used as a reference book constantly while playing.

I have to say that I have found fascinating to read this book. Recommended for anyone interested in war gaming. I would like to thank Osprey Publishing for the review sample.

I've seen several reviews of this and FoG Ancients, but all talk about the book, not really how the game plays.  Anyone have comments on that?  Also a lot of effort seems to be related to points system for tournament play.  I don't do tournaments and am more interested in how smoothly the game plays and if it has a historical feel with regard to  play and outcomes. I'd appreciate any comments.