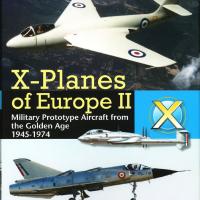 Tony Buttler was born in 1956, and joined High Duty Alloys in Redditch in 1974 as a metallurgist. For nearly 20 years he was closely involved in the testing of aluminum and titanium airframe and engine components for many of the world’s most important airplanes. It was during this timeframe that his interest in military aircraft grew into a passion. Since 1995, Tony has been a freelance aviation historian, with this book being his eighteenth major release. He has also written many titles for the Warpaint series of monographs as well as many articles for most of the popular historical aviation magazines.

As the title claims, this is a follow up to Tony Buttler’s first book on European X-Planes that was released in 2012 with Jean-Louis Delezenne. Due to limitations, many European X-Planes did not make the cut for the first book, and many of those are presented here. The focus is still on aircraft that actually flew, although some mockups and paper designs are included to relate a more complete story. You are also going to want to be a fan of fighters and bombers, since trainers, transports, and choppers are not represented.

This volume presents the additional X-Planes by first flight and offers many previously unpublished photographs. Each type presented begins with a short description of the aircraft’s size, armament, and performance specifications. I counted 443 black and white photographs and an additional 61 color pics. You also get fourteen color profiles and 28 drawings. Interestingly, the product details on many of the online sites selling this book list 400 pages (indeed the press release that came with the book stated that this book was 400 pages). Maybe, there is enough material for a third volume!

Overall this tome presents plenty of new photos of aircraft where you may have only seen a single photograph in an aircraft identification contest. Some aircraft like the BAC TSR. 2 have had many exhaustive books. That still leaves quite a few aircraft, like the Aerocentre NC 271, and Ikarus 452M that have seen very little press. Tony Buttler is able to weave in a tremendous amount of design and flight data in conjunction with flight testing and the political drama of the day and still manage to provide a compelling and readable storyline. Now I need to go out and get Volume One!