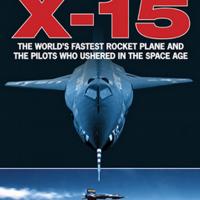 Much has been written about the world's most successful rocket powered research aircraft, the X-15. This airplane was designed to be a vehicle to provide aerodynamic, flight dynamic and structural data for use in the future development of hypersonic aircraft, all before anyone had even broken Mach 3. In October, 1954, NACA decided on the need for a manned hypersonic research vehicle, one that would fly up to Mach 7 and over 126,000 feet in altitude. By the end of the program the X-15 had reached a top speed of Mach 6.7 and an altitude of 347,800 feet during the course of 199 flights.

The authors; John Anderson, curator of aerodynamics at the Smithsonian National Air and Space Museum and Richard Passman, chief aerodynamicist on the Bell X-2 have crafted an excellent introductory story for this aircraft.

Basically, they do this by explaining the X-15 and how it worked, then going into details of the twelve pilots who flew this machine. The six chapters are:

This hardback book is loaded with b&w and color photos of varying sizes that covers all aspects on the X-15. The only error I found was on page 122, the lower right corner where the caption reads " Crossfield in discussion after a flight..." when the pilot shown is actually "Pete" Knight. There are many boxes that highlight a particular point outside of the main text, but still concerning the X-15. I would also like to point out that it's easy to think of the X-15 as a single airplane, but in reality three planes were built and flown. The first X-15 plane was #66670, the second X-15 plane was #66671 and the third was #66672. When you look at the photos you can tell which plane it was if you can see the serial number on the vertical tail.

This book is a good read and I can highly recommend it to anyone who wants to start to learn about this most remarkable airplane. I want to thank IPMS/USA and Zenith Press for the chance to review this book.

Info Box on Left
Previous Next