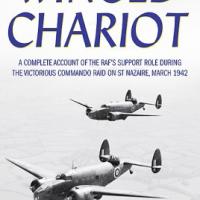 "In what has been described as ‘the greatest raid of them all', Operation Chariot saw heavy destruction of the enemy-occupied port of St Nazaire by British forces. Winged Chariot examines the role that the RAF played during this epic raid on 28th March 1942. With focus on the planning and actions of the operation, Peter Lush explores the three functions carried out by the RAF; the sweeping of the Bay of Biscay, the diversionary raid and protecting the withdrawing survivors. He also outlines the importance of the Photographic Reconnaissance Unit to the raid and the development of the Bomber and Coastal Commands particularly through the sorties flown by Coastal Command two days before the attack started. The book also highlights the tragedy that occurred for the RAF, when diversionary raids were carried out in impossible conditions; resulting in the loss of aircraft across Yorkshire and in the Channel. Lush examines whether this could have been prevented if the RAF had not been marginalized during the planning process of Operation Chariot. With the 75th anniversary of the operation in 2017, this timely and ultimate account written by an expert who has collated over forty years worth of research is an essential work for all those interested in military aviation, particularly during the Second World War.

Peter Lush is a committee member of the St Nazaire Society and has visited St Nazaire every year since 1982. He has led tours of the dockyard for a variety of people including veterans of the raid. As well as giving lectures of the raid, Peter was involved in the farewell cruise of HMS Campbeltown in March 2011, which went from Falmouth to St Nazaire."
I knew very little about the 1942 raid on St Nazaire and therefore did a bit of research to put history into perspective. I found Wikipedia to be a good resource for this information. From Wikipedia:

"The St Nazaire Raid or Operation Chariot was a successful British amphibious attack on the heavily defended Normandie dry dock at St Nazaire in German-occupied France during the Second World War. The operation was undertaken by the Royal Navy and British Commandos under the auspices of Combined Operations Headquarters on 28 March 1942. St Nazaire was targeted because the loss of its dry dock would force any large German warship in need of repairs, such as the Tirpitz, to return to home waters via either the English Channel or the GIUK gap, both of which were heavily defended by British units including the Royal Navy's Home Fleet, rather than having a haven available on the Atlantic coast.

The obsolete destroyer HMS Campbelltown accompanied by 18 smaller craft, crossed the English Channel to the Atlantic coast of France and was rammed into the Normandie dock gates. The ship had been packed with delayed-action explosives, well hidden within a steel and concrete case, that detonated later that day, putting the dock out of service for the remainder of the war and up to five years after.

A force of commandos landed to destroy machinery and other structures. Heavy German gunfire sank, set ablaze or immobilised virtually all the small craft intended to transport the commandos back to England; the commandos had to fight their way out through the town to try to escape overland. Almost all were forced to surrender when their ammunition was expended and they were surrounded.

After the raid 228 men of the force of 611 returned to Britain; 169 were killed and 215 became prisoners of war. German casualties were over 360 dead, some killed after the raid when Campbeltown exploded. To recognize their bravery, 89 decorations were awarded to members of the raiding party, including five Victoria Crosses. After the war, St Nazaire was one of 38 battle honors awarded to the Commandos; the operation has since become known as The Greatest Raid of All within military circles."

This work by Peter Lush is broken down into 12 Chapters and includes several appendices address the summary of RAF sorties flown, the Combined Plan. Bomber Command No. 141, and a report by Group Captain A. H. Willetts.

Here the author takes the reader through the planning stages of the raid and introduces many of the main characters involved in the process. Initially representatives from the RAF were not included in this process, and afterward, the RAF's role almost becomes secondary. There was some indecision on the actual targets and timing of the air activities that were to support the Royal Navy and Commandos. The RAF's role was always to be diversionary. Bombs could only be dropped when targets were clearly visible to the flight crews, but bombing the town was to be avoided. The mission planners wanted to draw the defender's attention to the sky.

This chapter reveals the history of Bomber Command, along with important personnel, bases and base construction and the type of aircraft flown. Some idea of the planning for the diversionary bombing is detailed here, along with the timing of the activities.

Coastal Command's mission of responsibility is described herein and reveals its importance in Operation Chariot.

Chapter 4 - The Men from PRU and the Women too.

This is by far a most interesting chapter so far as details of the recognition and importance of aerial reconnaissance is finally realized by the RAF. From the very early days of the 20th century, the British scoffed at the military need for aircraft and again for aerial reconnaissance. The lesson was learned just in time. Many of the personalities involved along with the reconnaissance methods are discussed. Women played a major part in this role. The fabrication of scale models of the actual target is created from reconnaissance photos. The target location was not provided to the raiders until the mission was underway.

In this chapter, the flotilla carrying the commando raiders takes to the waters. The voyage to the target is about 34 hours, and some of the time will be spent in the daylight hours. The first day dawns bright and clear: just what was not required. In support of this coastal command undertakes antisubmarine sweeps and aerial reconnaissance. Sighted by the flotilla's escort a surfaced U-boat is fired upon too early, adding to the drama. The U-boat got away.

Chapter 6 - Of Bomber and Bases

The location of many old and newly constructed bomber bases is described in this chapter. The bomber types stationed at each is also covered. The number of aircraft assigned to the mission was decided upon 24 hours before the raid, and bomber crews were not informed of the full nature of the operation, and therefore they knew nothing about what was happening on the ground.

The diversionary bombing raids are detailed in this chapter. Everything the bomber flight crews were faced with such as the weather, ground fire, damage, fuel supplies, scheduling of the bomb runs and other threats are described.

Chapter 8 - Fire Down Below

The chapter covers the battle on the waterfront. Much action and many heroic acts and deaths are told.

Enter the bad guys! Almost. The Germans were slow to react to the air raids. The 10/10 cloud cover discouraged Luftwaffe intervention of the bombers, but once they realized a raid was underway they began to take action against the departing commandos. Only one aircraft was to intercept the remaining boats but did not attempt an attack due to the heavy firepower of the small boats and especially the two destroyers.

Chapter 10 - From Dawn to Dusk

Here is where Coastal command provides air cover for the returning raiders.

Chapter 11 - Guests of the Third Reich

Life in the Stalag is reported in this chapter. The raiders that were captured during and after the raid spent the remainder of the war as POWs. As the Allies closed in from the east and the west the prisoners were moved on foot. during the winter, from one camp to another until finally liberated.

Who is to blame for the "ineffective" air raid? During the planning phase of Operation Chariot, the naval staff neglected to properly inform the RAF in a timely fashion.

There are two sections of war-time images covering the players, aircraft, the target and the German defenses. There are also various images, charts, and maps scattered through the text.

The author has presented a labor of love to the reader. He provides lots of names, dates, places and related events to the subject matter. Several paragraphs in each chapter are dedicated to providing historical background not only to the purpose for the raid but for personalities and organizations on both sides of the raid.

The foreword is provided by Air Chief Marshall Patrick Hine, GCB, GBE, who commends the author in his efforts to put the RAF's role in the raid in perspective. In the acknowledgment section, it became obvious all the parties involved in the gathering of the facts, the editing and proofing efforts to present an objective and comprehensive publication on this important historic event. The introduction wets one's appetite to learn more about this raid. This publication is highly recommended for anyone interested in learning more about the history of World War II, and the unsung heroes.

I wish to thank Casement Publishers and IPMS/USA for the opportunity to review his book. I truly enjoyed this read and am happy to have it in my library. It will be read more than once!​