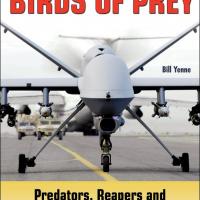 The concept of the UAV (Unmanned Aerial Vehicle) is not a new concept. But UAVs have been hot-points in the news from many parts of the world over the last decade. “Birds of Prey” is an absolutely fascinating, current, and in-depth description of the wide variety of these vehicles. The author skillfully intertwines factual information with almost "Tom Clancy" descriptions of combat action. The huge variances in the size, style and missions are covered extremely well. To put the size variance into a modeling perspective, the smallest winged UAV, the Scan Eagle has a 1 inch span in 1:48 scale! Compare this to the Global Hawk Block 20+vehicle with a wing span of 32.5 inches in the same scale.

I did not verify the details presented throughout, and there is no reference section or source list. However, there appear to be enough dates, names, and other information to follow up or research additional areas. There are quite a few enhanced photos of UAVs operating in hypothetical situations, but the photo captions make it clear whether the image is real or interpretive

The book content is well organized with the following chapters:

Much of the book is devoted to historical development and use of UAVs. Operational challenges and successes, as well as political challenges and successes (believe it or not) are discussed in a very engaging style. Remote piloting has made many interesting configurations possible, some of which are the strangest-looking things to fly. Missions range from active attack to long-range surveillance, tactical intelligence and many other operation-specific missions. Some of the capabilities may have a significant payback to the civilian sector in the future, e.g., coastal monitoring and forest fire observation.

So why would a scale modeler want to read this book? As a modeler with many more ideas than time and resources (familiar, eh?), I thought how intriguing it would be to build a collection of UAVs operational during 2010. Of course the majority of them would need to be scratch built, but what a display!

This title is a great read and addition to a modeling research library. With more and more kits of UAV subjects being released, e.g., Skunk Models Global Hawk, this book will certainly become an important reference for any builder. Even if you don’t plan on building any of these unique birds, consider the rumor that more orders have been placed for UAVs than manned aircraft.

Thank you again to Specialty Press for making this publication available for review. I truly enjoyed the chance to learn more about these unique and exciting aircraft.