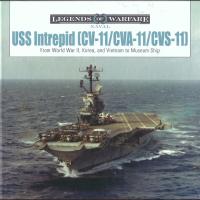 David Doyle's book on the USS Intrepid [CV-11/CVA-11/CVS-11] is one of the latest entries in the 'Legends of Warfare' series with entries in Ground, Naval, and Aviation. The Legends of Warfare series has expanded rapidly since its 2017 debut in the market with now over 100 titles released. This hard cover series covers a wide variety of monographs at a good price point.

After many years of being published in enthusiast publications focused on military vehicle restorations, David Doyle 'graduated' to full-fledged books in 2003. His first book was a hefty 512 page history of US military vehicles. He has now had more than 175 books published in military vehicles, aviation and naval topics. David and his wife Denise have amassed a collection of ten Vietnam era military vehicles that still displays at shows. In June 2015, was honored with the Military Vehicle Preservation Association's Bart Vanderveen Award, given in recognition of "...the individual who has contributed the most to the historic preservation of military vehicles worldwide." Be sure to check out David's website at www.DavidDoyleBooks.com where you can see and buy at a discounted price off MSRP, all his books that are still available.

The front cover features a color photograph of USS Intrepid during an operational readiness inspection on February 24, 1971 [the full photograph can be found on page 122]. You can see two Grumman E-1 Tracers and several Grumman S-2 Trackers at the forward edge of the deck. The rear cover features a black and white photograph of a Grumman F6F Hellcat preparing to launch during a shakedown cruise in October 1943 [the full photograph can be found on page 31]. You get 144 glossy pages graced by clear, well captioned, photographs. I counted 335 photographs: 56 in color and 279 in black and white. Many of the selected photographs are being published for the first time.

The Fighting “I” was the fifth of 24 Essex-Class carriers launched (April 26, 1943). Commissioned on August 16, 1943, Intrepid and her crew saw action in World War II, the Vietnam War (3 deployments), and served as a recovery ship for Mercury (Aurora 7 / Scott Carpenter) and Gemini 3 (Molly Brown / John Young & Gus Grissom). She survived kamikazee attacks and was torpedoed. Intrepid was in the Battle of Leyte Gulf, the Battle of Sibuyan Sea (the end of IJN Musashi), the Battle of Cape Engano, and the Battle of Samar. Intrepid was modernized to be able to operate jet aircraft in 1952 at Norfolk Naval Shipyard and began service in the Atlantic. Intrepid received an angled flight deck in 1955 in time to participate in Operation Strikeback, at the time, the largest peacetime military exercise in history. The Cold War saw her cruising the Atlantic and Mediterranean, searching for Soviet submarines. Intrepid was decommissioned for the second time on March 15, 1974. She lives on today as in 1982 she became the home of the Intrepid Sea, Air, and Space Museum in New York City.

David Doyle kicks this tome off in the Introduction, laying the Intrepid’s keel down on December 1, 1941. Construction photographs are shown at the top of Page 6. Both pictures are probably from December 26, 1941 and show the progress to that date with lateral ribs and a start of the double bottom steel plates. Intrepid hit the Pacific for battle right after its shake down cruise. She sustained damage from a torpedo hit February 17, 1944 during when a single Japanese torpedo hit the starboard side, just forward of the rudder post. Eleven crewmen died and seventeen were wounded. The steering-engine-ram room and the motor room was flooded. The rudder was jammed to a slight port attitude to the point where varying engine revolutions was utilized to help steer the carrier. Page 47 shows the damage to the rudder from a Pearl Harbor dry dock that performed temporary repairs. Permanent repairs were conducted at Hunters Point Naval Shipyard in San Francisco.

The Vought F7U-3M Cutlass served on Intrepid early on. Page 97 shows off the Cutlass in three photographs as a F7U-3M advances to launching position, catapult preparation, and launch of the underpowered aircraft. Note the high-angle of attack of the Cutlass in all three photographs. The fourth picture shows the pilots enjoying their enclosed escalator to the flight deck, a bit of comfort installed in the modernization of Intrepid between September 1956 and May 1957. Intrepid’s Vietnam experience of three tours included carrying Douglas A-4B Skyhawks and Douglas A-1H Skyraiders. Page 116 shows off both in action on deck. The lower left photograph shows many of the Skyhawks and Skyraiders lined up on both sides of the flight deck. The ‘Green Lizards’ VA-95 logo is easily spotted on the first three Skyhawks. Page 131 shows a nice color photograph of Intrepid being repainted in preparation for movement to Pier 86 as a museum ship. Notice that several of the museum’s aircraft displays have been encased in white protective covers. Intrepid has been designated a National Historic Landmark and includes not only the Intrepid, but a British Airways Concorde and the USS Growler guided missile submarine. Intrepid is also home to the Space Shuttle Enterprise (OV-101) which was a flying prototype Space Shuttle without the engines or a functional heat shield.

Model wise, there is a recent (2014) kit in 1/350 from Gallery Models that was re-released by Trumpeter in 2020 carrying A-4 Skyhawks, F-8 Crusaders, EA-1F Skyraiders, E-1B Tracers, and UH-2B Seasprites. Trumpeter has also released a 1/700 CVS-11 in 2022 with an aircraft wing that includes A-4 Skyhawks and F-8 Crusaders among other aircraft. Revell released the Essex-Class USS Franklin in 1967 in 1/720 that has been many times as the USS Intrepid in 1944 fitting with Helldivers and Hellcats.

This is a gorgeous hardbound book and is well worth the money at the MSRP of $24.95. Primarily a photo-essay, David Doyle provides plenty of detailed photographs with detailed captions and is an easy read. This is an excellent reference book solely for the pictures. I am definitely looking for more monographs in this affordable series of books from Schiffer.