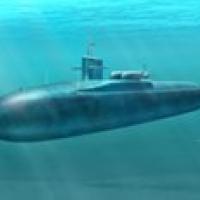 The USS Florida is an Ohio class Submarine. The keel was laid down on July 4, 1976 and was launched on November 14, 1981. Originally the Florida was designated as SSBN-728 and was converted to SSGN-728. This conversion started in July 2003 and the Florida was re-commissioned in July 2006 as SSGN-728. The USS Florida is still serving proudly today.

The kit is molded in light gray plastic. Construction on this model is pretty straightforward with only seven steps. Now this doesn't mean that this is a shake and bake kit. This kit was originally released in 2003 as a SSBN. To convert to a SSGN requires some minor surgery. This is all called out in the instructions and the parts are provided.

The biggest issue that I found was where the two hull pieces came together. This required lots of putty and re-scribing the panel lines. Speaking of the panel lines, they varied in depth so the re-scribing helped even things out. This was the most daunting part of this model, but if done correctly it will turn out very nice.

Overall the model is not that difficult of a build, but you will have to use some basic modeling skills to get it to turn out nice. Even in 1/350 scale this model is a pretty good-sized model.