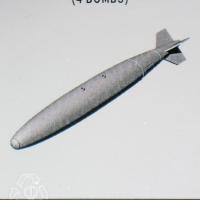 Videoaviation continues their excellent 1/32nd scale ordnance releases with a set of 4 USN MK83/BLU-110 bombs with light ablative fire-retardant coating used by the US Navy. The set consists of 34 cream colored resin parts perfectly cast: four main bodies, four tail fins, four fuses, four caps, and 18 attachment lugs along with decals. The main bodies are especially impressive. They have a very finely detailed molded on ablative coating. I have not seen this done often but have seen it replicated by modelers using putty or primer and a stiff brush. Ablative coatings are used to protect the explosives from cooking off as quickly if heated and look like rough sandpaper texture. Some great pictures are on the Videoaviation site listed above.

Construction is simple. Sand the casting block off of the body and fin, and glue, paying attention to the orientation of the fins versus the lug holes in the top. Choose a plug or fuse and glue into place. The lugs are wrapped in foam and there are plenty of extras so remove them carefully and glue to the top two spots. I had to do a little filling between the front and back halves and used glazing putty smoothed with lacquer thinner.

I then primed with Alclad gray primer and let dry. The bombs are overall FS36375 Light Ghost gray. I wanted to have an active bomb with a capped fuse so I needed yellow stripes, which are not supplied. I like this because I have always found decals rarely fit this so I painted the bomb nose yellow. I let dry and masked with three strips of thin Tamiya tape and shot the Ghost Gray again. After the tape was removed and a few touch ups done, I added a black wash, used flat coat, and painted the lugs with a touch of silver for wear.

This is really highly recommended to all modeling 1/32nd scale modern jets! The ablative coating is wonderfully molded and not available on kits normally. Easy to use and makes a great improvement.