US Marine Versus German Soldier 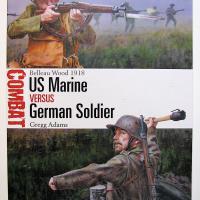 History: After the US declaration of war on Germany, hundreds of thousands of American troops flooded into France and were thrust into the front line. Among them was the US Marine Corps' 4th Marine Brigade whose first major action was the battle of Belleau Wood in June 1918, fighting elements of Germany's 10th, 28th, and 237th Infantry divisions. Volunteers to a man, the newly arrived Marines faced experienced but war-weary German conscripts whose doctrine had been honed by nearly four years of conflict on the Western Front. During the fighting, the Germans are alleged to have given the nickname "Devil Dogs” to the Marines, and Belleau Wood has become enshrined in the Corps' heritage.

The book: For a book with just 80 pages and loaded with illustrations it has a lot of information on the Marine assault at Belleau Wood and it appears Greg Adams has done a good bit of research. The chapters are:

The first chapter should get most people hooked as it breaks down the strength of the opposing sides, what they should have been and what they actually were. Adams then takes us through the tactics and weapons used by both sides along with the leadership and he does this without getting so technical as to bore you. In the three chapters devoted to the actual combat the author takes you day by day, sometime minute by minute, through the action with detailed information, including the units involved for both sides and casualty numbers of the units involved. There are 4 pages of maps and I wish there had been more but what you get is good.

After reading books such as ‘Devil Dogs: Fighting Marines of World War I’, ‘His Time in Hell: A Texas Marine in France’ and ‘Suddenly We Didn't Want to Die: Memoirs of a World War I Marine’ I figured this would just be kind of a boring read…….I was wrong. This is the first book of this series I have read and am impressed by it, lots of information in a small package. A good number of photos of both German soldiers and Marines and of the terrain.

As far as modelling is concerned, there are enough pictures of the area in here to give modelers an idea for a diorama or vignette. However, I’m not sure there are accurate figures of Marines in the proper uniform for this, so you will have to do some research there.

Any of us who served or are serving in the Corps have heard about Belleau Wood and its significance. If you want a good quick and accurate read on this pivotal battle, I highly recommend this book.

I would like to thank Osprey for putting this book out and to IPMS/USA for letting me read and review it.

One of the maps
Previous Next