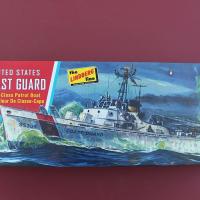 The kit is produced by Round 2 Models, a well-known company who bought the Lindberg Line and is re-issuing the kits in very colorful packaging. The box art work in outstanding! The scene depicts the cutter at high speed engaging an enemy submarine on the surface at dusk.

The kit consists of 109 parts and comes on four white sprues and one clear sprue. The parts are nicely molded, but there is a considerable amount of flash. This is to be expected keeping in mind the age of the molds. All panel lines are raised and all the sprues have large gates. The 6-page instruction sheet shows the suggested assembly through 16 steps starting with the 2-piece hull and deck assembly, and progressing through the superstructure to final assembly of the threaded railings. The construction process is the same for all four options. Since the cutters were unarmed until about 1964 you would need to omit the 40mm MK64 grenade launchers and the (2) .50 cal machine guns Type B which were introduced around 1987 to option 1 “95304 (1953-1964)”. There are decals provided for all four options. The clear sprue parts are a little thick but fit with no problems.

This kit is a re-box of the older kit that included an electric motor so you will have interior structure parts left over which would have been used to cradle the electric motor. The kit fits together very nicely but filler was required for the seam gluing the two-piece hull together. When gluing the deck to the hull there is about a 1/8 gap at the stern which required filling. I had no problems with gluing together any of the remaining assemblies and did not have to use any filler at all. But all the pieces did require cleaning up of flash. Again please remember that the molds for this kit are getting old and the flash is to be expected. I built this model as “95304 Cape Gull (1964-1988) so that I could install the grenade launchers and .50 machine guns. I did not use the thread that was provided in the kit for the railings. The thread is very fuzzy and this really would show up after painting. Also, in the older version of this kit the superstructure was designed to be removable (to access the electric motor) so there is a very large gap between it and the deck. See the photo of the superstructure removed and in-situ. The deck also has a square hole remaining where the motor switch would have been. It is located just forward of the superstructure on the port side. I will cover this with a coil of scale rope.

The decals are printed in standard black with a decal provided for the red, white and blue chevrons on the bow. There are also decals provided for the US Coast Guard coat of arms. The decals lay down with no silvering. Also thoughtfully supplied is a sheet with signal flags and a US flag.

Overall the kit is a joy to build and builds into a handsome Coast Guard cutter that would look great in a diorama cutting through heavy seas! There is some flash but is easily cleaned up with a sharp X-acto blade and some filler was required.