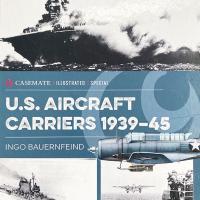 A comprehensive account of the development of American aircraft carriers up to and during World War II.

This extensively illustrated volume tells the dramatic yet successful story of US aircraft carriers in World War II by class, ranging from early pre-war designs to escort carriers built from destroyer hulls, to the gigantic fleet carriers serving as the predecessors of modern-day super carriers.

Besides covering the famous great carrier battles in the Pacific, this book also tells of the equally important actions of US flat tops hunting and destroying German U-boats in the Atlantic, making an enormous contribution to the elimination of the U-boat dangers and the safe arrival of transatlantic supplies, so desperately needed for the launch of D-Day.

Including profiles and explanatory text boxes, the concise text gives a clear overview of each ship’s career, its fate and its significance in American naval history. Moreover, the reader learns about the technical evolution of US carriers throughout the war, and the various aircraft launched from these magnificent vessels to engage their Japanese or German foes. This volume provides an overview of preserved World War II flat tops serving as floating museums for future generations as well as a dive to the sunken USS Saratoga at Bikini Atoll.

Ingo Bauernfeind studied military and naval history, visual communication, and documentary film at Hawaii Pacific University, Honolulu. Ingo has completed 30 books about naval, military, and aviation history and has directed or co-produced award-winning documentaries in cooperation with German and American TV network, including films about the Japanese attack on Pearl Harbor and the Pacific War. In addition, Ingo has been producing interactive museum guides for history and naval museums in Pearl Harbor and in Germany.

As the Hospital Corpsman Second Class (HM2) for Fighter Squadron Eight-Four (VF-84 Jolly Rogers) I had the distinct honor of serving aboard USS Nimitz (CVN-68) and USS Theodore Roosevelt (CVN-71). As such, I have a deep, life-long appreciation of the American Aircraft Carrier. And, also, kind of a love/hate thing. If you know, you know. With a strong interest in WWII Aircraft Carriers, and all things NAVAIR in general, this book ticks all the boxes for me.

The very moving Forward was written by Rolf Sabye, a former member of the last crew to serve aboard the last carrier to bear the name “Hornet” (CV-12). Beginning with Eugene B. Ely flying a Biplane off of a temporarily-installed ramp aboard the cruiser U.S.S. Birmingham in 1910, Chapter 1 covers the development of the Fleet Carrier up to December 7th, 1941. After that, it looks at the Doolittle raid, Battle of Coral Sea, Battle of Midway, and other major engagements throughout the war. Also examined are the various classes of carriers. Packed with archival photos, most of which I’ve not seen before, mixed with a few you’ll recognize, the book starts out as a visual history of one of the most important weapons systems developed and impacted upon the outcome of WWII.

Aside from discussing the differences between the Fleet & Escort Carriers, and the role of the Escorts, Chapter 2 examines the classes of CVEs, (Long Island-class, Bogue-class, Sangamon-class, Casablanca-class, Commencement Bay-class) and provides a brief history of literally every CVE that served during WWII, replete with photos of said subjects. Again, a brief history of every ship in their respective class is provided, with photos. Chapter Three follows the same formatting.

Chapter Four specifically focuses on the carrier aircraft employed by the Navy during the war. For each aircraft, several pages are dedicated to discuss the machines’ development and roles. Aircraft covered includes:

Each aircraft subsection also includes a full color profile of the machine being discussed, as well as a myriad of B&W archival photos. The chapter concludes with a glossary.

On July 25, 1946, the 23-kiloton underwater blast “Test Baker” detonated some 400 yards away from U.S.S. Saratoga, part of the Operation Crossroads nuclear blast test group. The blast lifted Saratoga completely out of the water, and created severe damage and leaks to her hull. She sank shortly thereafter, and rests offshore of Bikini Atoll still today. Chapter Five covers Operation Crossroads, and the underwater archeological mapping of Saratoga’s’ remains. What I found most fascinating is the underwater pictures of her from today, inlaid with the same view taken in the 1930s and 40s. Detailed photo captions describe what the reader is looking at. Multi-beam sonar point cloud images are also provided, as this is presumably part of the mapping process.

Chapter Six is literally a guided tour of U.S.S. Hornet, covering the major subsections of the ship. Color photos, deck diagrams, and extensive text explanations take the reader on a virtual tour of this once-great warrior, who now resides as a museum in Alameda, CA. The chapter also includes a subsection of saving and restoring historic aircraft.

The book concludes with a brief exposition on post-war use of the Essex-class ships. As recovery ships for the Apollo missions, to the sinking of U.S.S. Oriskany to create an artificial reef, to the U.S.S. Hornet starting a new life as a floating museum, the chapter is a logical conclusion to the life and times of these magnificent ships during the years 1939-1945.

U.S. Aircraft Carriers 1939-45 is probably my favorite book that I’ve reviewed in the 18 or 19 years I’ve been doing this for IPMS/USA (That long? Really?). Of course, I am biased to the subject matter, but the author has taken so much important information and put it all together in such a highly organized, logical, and easy to read format, that I have to recommend it to you very highly, and without caveat. My thanks and gratitude to Casemate Publishing, as well as IPMS/USA, for allowing me to review this outstanding title.