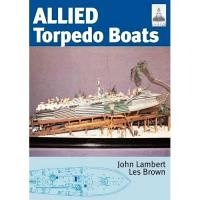 A large book at 8-1/2 by 12-inches, Allied Torpedo Boats is a hardbound ShipCraft Special of 128 pages by Seaforth Publishing and Classic Warship Publishing, which has produced this work, composed of 9 sections.

Another short section on "Experimental Craft" covers a few of the one-offs which were never put into production, and the last section covers "Selected References”. It includes websites for more information as well as model supply businesses which sell “PT Boat stuff.”

Overall, I liked the book, as it’s full of line drawing and plans which would be enough to keep any scratch builder busy. There are also many detailed photos of complete boats and close-ups of details on them. It will help me in my personal adventure of building molds for a 1/16 scale Elco short kit which I’m working on.

Thanks to Classic Warship Publishing and to IPMS/USA for the opportunity to review this book.