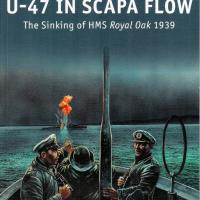 Osprey Publishing’s latest edition in their Raid series looks at sinking of the HMS Royal Oak by German U-boat U-47 in 1939. From the website: "At the outset of World War II, Scapa Flow was supposed to be the safe home base of the British Navy - nothing could penetrate the defences of this bastion. So how, in the dead of night, was Gunther Prien's U-47 able to slip through the line of protective warships to sink the mighty Royal Oak? This book provides the answer with an account of one of the most daring naval raids in history. Drawing on the latest underwater archaeological research, this study explains how Prien and his crew navigated the North Sea and Kirk Sound to land a devastating blow to the British."

The author Angus Konstam provides detailed research, both past and present, of Scapa Flow's natural and man-made defense system, and how ultimately the British Admiralty was to blame for the deterioration of its defense system during the inter war period, and ultimately, the death of 800 men and boys. Sadly, the Royal Oak, by now a 2nd line capital ship, was used as a training ship, with 48 out of 120 boy sailors lost in the sinking. In addition to the fact filled content of the text, the book comes alive as the author recounts the drama of the night of October 14, 1939. The raid was more a propaganda victory for the Germany Navy and U-boat chief Karl Donitz, as the 1st line ships, Hood, Repulse, Furious, Nelson and Rodney had left Scapa Flow earlier in October. Nevertheless, the raid gave Donitz the green light to utilize his U-boats to devastate Allied navies and shipping during the early part of World War II.

The book is well organized and filled with historic b/w photos including Luftwaffe reconnaissance pics, modern day color photos, and excellent maps, all providing the reader with a birds eye view of the raid.

A dramatic re-telling of a near impossible feat of submarine warfare, it is highly recommended for history buffs and modelers. Thanks to Osprey Publishing for the review copy, and thanks to IPMS USA for the opportunity to read and review this book.