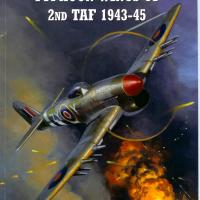 The Typhoon was the primary close ground support aircraft for the British and Canadian land forces in the European theater of World War II. Twenty squadrons flew this aircraft in the 2nd TAF, who were also instrumental introducing the use of controversial rocket armament. The aircraft may not be pretty but has a listed history of successful land supported engagements. This Osprey book brings the Typhoon to life in a very condensed ninety-six pages. Since the author’s father was a pilot of these aircraft, I imagine there must have been many conversations between them.

The first five pages describe the structural design of the Typhoon as being technically outdated at the time World War II broke out. Test flights, structural failures, missions, engine failures, and pilot losses are all compressed to reveal that the production Typhoon was in need of fixing. Further pages describe the problem solving methods. Once these efforts were accomplished, the aircraft was identified to enter the war as a front line ground support role, but continued improvements were still needed due to more failures and loss of pilots.

Quoted experiences from the leaders and pilots are plentiful in these pages to substantiate the missions these men and aircraft endured. The author did not fear exposing the negative incidents of pilots shot down with effective German Flak over enemy territory, especially during D-Day at Normandy where 400 aircraft and 150 pilots were lost. The book contains the Sectors, Wings, and Airfields that comprised the operational structure of the Typhoon, which compliments the color aircraft profiles.

In addition to the many black and white photos, there are ten pages of Typhoon color profiles for the model builder. Look in the back pages for more detailed information about the profiles. The Osprey series is not known for any other aircraft color views and carry on the tradition here to leave the modeler to sort out further research elsewhere. The book is excellent reading material and great war-time information about the Typhoon and the brave men who flew them. The book kept my interest throughout and it is highly recommend that you add this to your Osprey series.

Thank you to Osprey Publishing for providing the review sample and to IPMS USA for allowing me to review it.