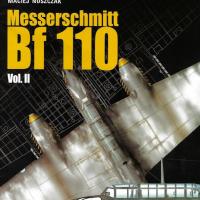 The Messerschmitt Bf-110 is another iconic mainstay of Luftwaffe aviation that is most recognizable to almost any aviation enthusiast. Originally designed in the 1930’s, the 110 was one of the Luftwaffe’s heavy-fighter/bomber mainstays. Originally it was anticipated to be replaced in the early 1940’s by the Me-210, but due to the 210’s poor performance issues the 110 was given a second chance.

Due to the cancelation of the Me-210, the Luftwaffe had decided it needed to continue to utilize the 110 airframe. In order to do so the 110 needed to overcome its shortfalls in order to keep up with the ever changing and rapid developments in aviation during World War Two. Through the procurement of more powerful engines for the 110 airframe it was able to prolong the use of the aircraft well to the end of the war.

The Topdrawings paperback from Kagero is a 20 page book with a very brief history of the aircraft itself that is provided in both English and Polish. The subsequent pages are filled with numerous black and white line drawings of the aircraft itself represented in 1/72 and 1/48 scale. The drawings comprised in this book cover the E, F, and G variants of the Bf-110.

Most of the line drawings are of side profiles with expanded close up drawings on engine nacelles and other distinguishing aircraft features. In the center of the book there are 3 detached sheets of 3 view drawings in black and white line diagrams of the aircraft and its variants along with cross sectional diagrams. The book also includes 3 color panels of operational aircraft and its markings with a caption of the specific aircraft.

The last section of the book includes more line diagrams of the various models, and has highlighted in gray exactly what those changes to the aircraft were. I personally like this feature as it makes it very easy for the reader to actually see what the changes were between each variant. Information such as this is invaluable for us in the modeling community especially for trying to make modifications or scratch building. With modelers in mind Kagero has included with the publication 1 black vinyl canopy sheet designed for the 1/72 Eduard Bf-110G kit. The mask includes two different canopy versions that were available on the aircraft.

I really like these books and would like to thank Casemate Publishers for supplying IPMS Reviewer Corps for this copy. I have recently discovered some of Kagero’s other publications and purchased some other of their offerings as well.