Titanic and Her Sisters Olympic and Britannic 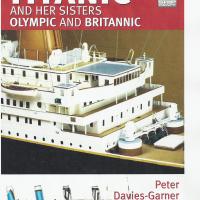 With the approaching 100th anniversary of the tragic loss of the Titanic on April 14th, 2012, the modeling world has seen an influx of Centennial edition kits. To go with those new kits, Seaforth Publishing has released a new book in their well known ShipCraft series. ShipCraft #18, Titanic and Her Sisters Olympic and Britannic, follows the same format as previous editions in the series. The book features a history of the ships, followed by a section on modeling the Titanic, and finishes up with a section on paint schemes and modifications.

Perhaps the best part of the book is the reference photos. Because the book is not solely focused on the Titanic but also covers the other two ships, it includes a lot of photos of details from those ships that were shared with the Titanic. Because the Titanic sank on her maiden voyage, not many pictures were taken that still exist. Another nice feature of the book is the paint schemes for the Olympic and Britannic during the war, for those who want a slightly different looking “Titanic”. The book also gives references on what to modify to create those two ships. And of course, being a model book, it’s nice to have a gallery of the available kits of the Titanic, each with a mini-review, as well as aftermarket goodies and professionally built models, including those at the Titanic Museum and those built for films.

Overall, this is another fine reference book from Seaforth Publishing. It is a must have for any Titanic nut, such as myself, or anyone who is planning on building any of the three Olympic-class liners. My thanks go to Seaforth Publishing for providing the review sample and to IPMS USA for allowing me to review it. Happy modeling.