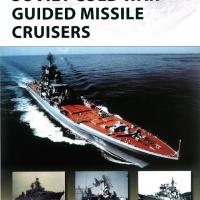 Soviet Cold War Guided Missile Cruisers by Edward Hampshire is his third book and first for Osprey Publishing. Edward Hampshire earned his PhD in War Studies from King’s College in London with a thesis on British naval equipment of the 1960s. His focus is Cold War era navies and British defense policy since WWII. Dr. Hampshire has taught at the Royal Military Academy Sandhurst and has worked at the National Archives. He has been featured on television and radio, including the BBC, ITV, ABC, and NBC. Dr. Hampshire’s previous book was published in 2013, East of Suez to the Eastern Atlantic, British Naval Policy 1964-70. He also co-authored British Intelligence: Secrets, Spies and Sources, published in 2008. He has been a Senior Lecturer at the Royal Royal Military Academy Sandhurst since 2012.

Paul Wright, born in N. Wales in 1947 has worked as a free-lance maritime and landscape artist since 1969. He has been teaching since 1974, starting out at the West Surrey Institute in Art and Design, and is currently a senior lecturer at Kingston University Illustration Course. His paintings are in private and corporate collections all over the world, including Dallas Texas. Paul Wright has also worked in animated feature films such as A Christmas Carol, Wargame, and Second Star on the Left. His cartoon strip, Ratman, has appeared in the Times Newspapers weekend edition. Paul Wright currently lives and works in Surrey.

Dr. Edward Hampshire provides a revealing look at the evolution of the guided missile cruiser in the Soviet Union that occurred after World War II. The introduction covers the ebb and flow of the Soviet political environment and how the strategy evolved. Up next is a discussion of the weapons and sensors that provides a nice introduction to the individual ship classes. Stalin’s naval staffs saw the need for an upgrade of the Soviet Navy as World War II began to end. This included 25 light cruisers of the Sverdlov-Class and four battlecruisers of the Project 82. Two of the Sverdlov-Class light cruisers ended up being converted to guided missile cruisers and the last two of the Project 82 vessels were also converted to guided missile cruisers. As you can see by the contents below, each of the other classes are also presented leading up to the huge Kirov-Class battlecruiser that are the largest and heaviest surface combat ships in the world built since 1945, outside of aircraft carriers and amphibious assault ships. Last but not least, Dr. Edward Hampshire addresses the operational service and some of the more dramatic events in the history of the Soviet guided missile cruisers.

Dr. Edward Hampshire provides a good introduction to the topic with many of the information newly available from Russian sources. One of the operational incidents I found fascinating is accompanied by a Paul Wright painting, “Ramming Glasgow”. This incident occurred in late May 1981 with the HMS Glasgow, RFA Olwen, and the cruiser Admiral Isakov. The HMS Glasgow and RFA Olwen were sent to gather intelligence on a Soviet exercise off the northern coast of Russia. Tensions escalated quickly with fire control radars locking on and weapons ready to deploy. As the HMS Glasgow made an attempt to come in closer, the Admiral Isakov turned into the HMS Glasgow. The HMS Glasgow sped up and took evasive action but still received a glancing blow that resulted in damage to some of the forecastle fittings. Considering that the Admiral Isakov was twice the size of HMS Glasgow, it is fortunate there was no loss of life. If you own one the previous releases in the New Vanguard series, you know what you are getting. If this is your initial entry into this series, you will be quite pleased.