Tanks of the Second World War 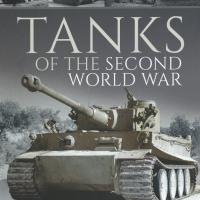 The title of this book might be a bit misleading but I am not complaining. The brunt of the book is definitely on tanks from WWII, but there are extensive chapters that focus on the evolution of the tank from WWI on through the development of Main Battle Tanks (MBTs) in the post-war age. The breakdown of the book´s sections are as follows:

The section on WWI tanks is minimal, listing only some of the representative tanks like the various British Mark tanks, the French FT-17, and the German A7V. Notable examples missing include the Whippet, Schneider, and St. Chamond tanks, but again, they are not the focus of the book, so this is not a ding on the content.

Like all of the charts throughout the book, the ones for the samples listed above give technical specifications such as armament, crew, frontal armor thickness, weight, engine horsepower, top speed, engine to weight ratio, range, and numbers built.

The Inter-war section spends time on how each of the featured countries in the book listed above capitalized on the successful designs from the Great War to modify or even design their own vehicles. We see the start here of the various classifications of tankettes, light, medium, and heavy tanks. There is a particularly interesting section on John Walter Christie and his famous designs that influenced Soviet designs into the following world war. There are truly some unique looking tanks in the section and some designs were failures, but I found this section to be quite fascinating in regards to the creativity of some of them.

Tanks in Action, the 1930s (and 40s) is the major section of the book-- taking us through Manchuria, the early stages of the Italian aims for Africa, the Spanish Civil War, Poland, France, the Balkans, North Africa, Barbarossa and the Eastern Front, Italy, Normandy, Germany and finally the war in the Pacific. We see the early designs based on the FT-17 as well as the early Panzer versions tested in Spain and used to effect in the early stages of the war. The photos throughout the entire book are excellent and show tanks in action, disabled, and wrecks in clear quality. There are plenty of ideas for various scenarios to inspire you for your models to display.

The last section focuses on post-war designs including the M26, M41, M46, 47, and 48, and the use of the T-34 by other countries as it was replaced with T-44s, T-54s and T-55s. The book ends with British Centurions, French AMX-30s, and German Leopard tanks. I would have liked to have seen some of the more modern designs like the Merkava, Chieftain, Challenger, and Abrams tanks, but again- they are not the focus of the book.

This is an ambitious project to be sure, covering all of the major tanks of the Second World War in one volume. The author has managed an excellent overview of not only WWII, but pre-war and post-war armor as well. The photos are excellent and new to me. One that stood out to me that I have included is a German crew in North Africa cleaning out the main gun barrel that is most definitely the inspiration for the box art of a Miniart German Tank Crew figure set I have in the stash. I enjoyed reading through the book and it has inspired some great vignette ideas that I am excited to start on.

My thanks to Casemate Publishing and IPMS-USA for this review sample.