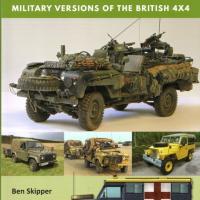 “After the Second World War many American military vehicles become surplus stock and soon found their way into the hands of farmers and land owners across Great Britain. The subsequent heavy use and the real possibility of difficulties obtaining spares led Maurice Wilks, the Rover Car Company Chief Engineer, to design and build a replacement.”

“Since its introduction in 1945 when the Land Rover was quickly adopted by the War Department as a utility track, it has become an identifying symbol of the British military. From the jungles of South America to the frozen tundra of NATO's northern borders, this light utility truck has proved itself time and again. Indeed, such is its prowess and adaptability in the field it has been adopted by allies and former adversaries alike as the go-to truck. From firefighting to special forces transport the Land Rover is the everyman of the 4x4 world.

Its genesis was in a world of post-war austerity, and it was this that made the Land Rover the ideal military platform. It was made from straightforward engineering and had a utilitarian arid fuss-free appearance with wonderful adaptability, all without too much damage to performance or function Its steel ladder chassis, aluminium panels and leaf-sprung construction marked this new vehicle out as something that was field-ready.

First ordered by the British Army in 1949. the Land Rover was soon deployed to Korea with the British contingent. This baptism of fire cemented the Land Rovers reputation and what was initially intended as a temporary model for Rover proved its ability to tackle anything thrown at it.”

In 1956 the Land Rover secured its dominion m the British Army over the Austin Champ by being declared the main General Service (GS) truck.”

My reading of this LandCraft book number 7 was a pleasant surprise for me. I had only several personal experiences with the venerable Land Rover vehicles (mostly with the more common automobile like configurations that we often see on roads around us today), though I have been intrigued with ‘military’ versions I’ve traveling in the United Kingdom and across Europe. However, I had no idea about just how many versions of Land Rovers there are. These vehicles are truly ubiquitous today. As the author points out: “That some 70 percent of the original two million Series and Defender Land Rovers are still in use today prove that the Land Rover really is ‘the best 4x4xfar’.”

While it seems to be a modern vehicle, Land Rovers are a reasonably ‘new kid on the block’ and I was initially interested in just the special operation type of Rovers, this book proved to be far detailed than I had imagined. In this book Ben Skipper develops a great modeling publication, including eight four view color renderings (including the ‘Pink Panther’), 16 pages of great model photographs (with three kits described in depth), four pages summarizing all of the known model kits and decals (with detailed reviews of their strengths and shortcomings) and a unique list of what to watch for when building a Land Rover model.

I can’t say enough in summary about this book. In it’s 64 pages, there are a great many color photographs and color illustrations. I was pleased to see most of the variants were outlined in this book (including the forward control vehicles) and had not realized how many special purpose vehicles Land Rover manufactures. The author also provides a great look into the many small details which might also be overlooked by readers and especially modelers.

My thanks for this review copy and my thanks to both Casemate Publishers and IPMS/USA for my opportunity to review, read and thoroughly enjoy, and provide this review.