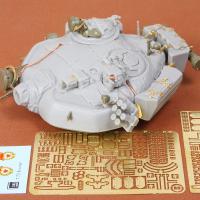 This is not the first turret conversion I’ve dealt with for the ubiquitous Russian T-72 tank in 1/35th scale. Dragon Models, which was one of the first companies to come out with something resembling a real T-72 tank in this popular scale, even at the time realized that the turret was an extremely elusive shape to model accurately, and almost immediately released their own resin revision. I don’t pretend to be an expert on modern Soviet armor, so this review is going to be mostly based on my observations about this specific kit and what it offers.

This specific version of the turret depicts the T-72 turret as it was modified in preparation for the stand-off armor bricks that were to be added later. It featured the much thickened front cheeks as well as the moving of the smoke grenades to a plate on the left side of the turret. It also has passive armor “blanketing” over a good portion of the turret – an especially hard modification to scratch yourself.

The conversion includes roughly 40 resin bits for both the T-72B and T-72B1, including the turret itself, about 70 photoetch parts, an excellent instruction sheet (very much needed) and a tiny decal sheet if you want a parade version in your collection. There are only a few bits and pieces required of the donor kit, which was a good thing as I didn’t have the Tamiya model in stock. Instead, I would be using the old Dragon kit.

Despite my reservations about this change, I was pleased to find that, with a bit of diddling, the SBS turret could be made to fit. I simply had to enlarge the turret ring with a router bit, which took about five minutes. Assembly of the turret itself took considerably longer, as it features tool boxes mounted on tiny pintles and a host of other finicky details, all faithfully represented in resin and photoetch. The kit includes extra photoetching for some of the smaller details, such as the toolbox locks, which you will probably need if you’re as fumblefingered as I was. In fact, I must admit, I finally elected to dispense with some of the tinier parts, such as the minute wingnuts, because it was obvious that they would never survive the drybrushing process. Even so, the final product is far more realistic than the kit part, which I’ve included for comparison. The conversion looks more rugged and captures the feel far better than the original plastic.

Ultimately, I’m very pleased with the look of this new turret. It adds to the finished model immensely and captures the rawboned look of the real thing. Despite the sometimes frustrating assembly process, I can enthusiastically recommend this detail kit if you’re looking to upgrade your T-72.

My heartfelt thanks to SBS Models and IPMS/USA for a chance to review this lovely detail set.