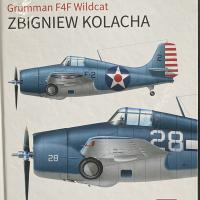 This book is the latest in a new reference series for aircraft modelers called "Spotlight On" and presents detailed illustrations of the famous American carrier-based fighter aircraft that began service in 1940 with the US Navy.

The Wildcat was the only effective fighter available to the US Navy and Marine Corps in the Pacific Theatre during the early part of the Second World War.

The book contains 42 specially commissioned color profile views of the colors, camouflage and markings of the Grumman F4F Wildcat and the General Motors built Wildcat including the Martlet.

The book starts with a single page introduction where the author and illustrator Zbigniew Kolacha provide details of the development and combat experience of the Wildcat. The illustrations are lavish and beautiful to look at. Most of the books’ profiles are side views, along with five upper plan views. The author has provided brief detail of each aircraft including location, pilot, squadron and date. Perhaps best of all, for the modeler, he also includes details about the camouflage schemes, namely the colors used. The illustrations also include a couple of brightly colored, Pre-War “Yellow Wings” airframes.

The airframes illustrated include:

Probably the 3 most prominent Wildcat Aces, Edward H. O’Hare, Robert Galer & James Thatch, have their machines included in this book. I also have noticed that several of the illustrations cover decal options that I’ve seen in many available kits. If you’re a fan of Grumman’s’ pugnacious little Wildcat, this is a great book to have as a color/markings reference. Even if you’re an enthusiast who doesn’t model, it’s a great addition to your library. Recommended.

My thanks and gratitude to Casemate, Mushroom Model Publications & IPMS/USA for the review sample.