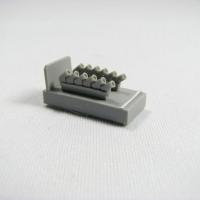 I have acquired a few Airfix Spitfire Mk IX's recently and found the Quickboost product to be a sound rendition. The Airfix Spitfire provided the common standard issue flared or fishtail exhaust. Now with the new Quickboost round exhaust for the Spitfire Mk IX it is now possible to make other variants. Many post war variants used the simpler round exhaust such as Belgium and Dutch machines. Also many Mk IX e used these exhaust also. It would be a simple matter to relocate the wing gun blisters and re-position the cannons to the outboard. This will enable you to make make post war Mk IX e in Czech, and the above mentioned liveries using the round exhausts.

The Quickboost exhaust fit perfectly to the Airfix cowl and can be used as direct replacements for the kit exhaust. Also I was pleasantly surprised that with a little trimming these exhaust also fit the Hasegawa Spitfire Mk IX c as well. I recommend this latest Quickboost update for the Airfix Spitfire Mk. IX without reservation.

Thanks to Quickboost and to IPMS/USA for the opportunity to review this sample.

Quickboost part in place
Previous Next