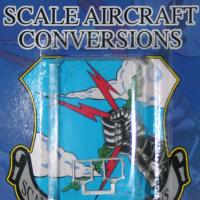 This is another of SAC’s marvelous landing gear replacements for 1/144 scale aircraft. One of the worst things to fix on a finished aircraft is the broken landing gear which occurs from either a move or less than careful handling, usually by a friend of spouse. I was at a display when a spectator started to pick up one of Brian Baker’s planes. I tried to stop him, but he said “I know what I’m doing!!” and then proceeded to remove the antenna, landing gear and rigging in one grab.

You get two sets of nicely cast metal gear legs. This is cool, because Eduard has two Spitfires in their 1/144 kits. Well, there IS a single kit, but I haven’t seen that one yet.

I show in the photos below that the SAC parts match the Eduard parts pretty closely. In 1/144, it’d be hard to say exactly. Even with a magnifier, I’m not that good.

I first removed the parts from the sprues. I did a little cleanup with a fine sanding stick to take care of a little extra metal on both ends. Unless you’re really into , you don’t need to paint these parts. The landing gear legs on the Spitfire I did were silver.

I painted the wheels. Another fairly easy thing, as Eduard provides wheel masks. The landing gear doors were painted interior green on the inside, and underside color on the outside.

I put the wheels on the landing gear legs with a tiny drop of thick CA. Good fit, pretty straight. I attached the fear doors to the legs with Gator glue. This turned out to be a good move, as the doors didn’t want to just fall into place like the wheels did, and I needed a few minutes to adjust them.

Once these glue on the parts was completely dry, I attached the legs to the wing. My test fit showed me there was no problem, and I had almost no problem getting both legs on. Of course I missed the spot on one of them, but fixed it immediately, before the CA had a chance to set.

Highly recommended. The parts are solid and well molded, and they fit marvelously. I look forward to doing this again with the other Spitfire in the box.

Many thanks to Scale Aircraft Conversions for the review item, and thanks to IPMS USA for the chance to review this great product.