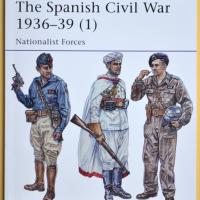 Number 495 in Osprey’s Men-at-Arms series provides a concise, yet reasonably comprehensive description of the Spanish Civil War…explaining its causes, listing a chronology of events and describing those who fought on the side of the Nationalists. The Spanish Civil War 1936-1939 (1) Nationalist Forces delivers a lot of information about a significant event in the history of 20th Century warfare within its modest 48-pages.

The Spanish Civil war was sparked by a military uprising in July 1936, following years of turmoil within a heavily Catholic country struggling with social reforms and the demands of an impoverished populous. In the author’s introduction, he describes the Spanish Civil War, 1936-39, as the major international event of the 1930s and the curtain-raiser to World War II. It was the first great clash of 20th-century ideologies, between the rebel Nationalist army led by General Francisco Franco (right-wing, and aided by Nazi Germany and Fascist Italy), and the Spanish Republic (AKA: the Popular Front). For Spain, it was a vicious divisive conflict that saw the death of at least 500,000 of its people. For many in other countries, it was a political conflict that inspired idealistic volunteers to join the fight for their ‘cause’. For the Germans and Italians it was a war of convenience that provided Hitler and Mussolini with a testing ground for their military equipment and strategies, and a training ground for their officers and men.

The Spanish Civil War 1936-1939 (1) Nationalist Forces condenses the conflict into various individual campaigns andbrings into focus the different groups and militias that came together to help ensure the eventual Nationalist victory over the Republicans. It is an illustrated historical reference that covers the subject through concise chapters, specially commissioned artwork, maps and period photographs. It is an important and easy to read book on the subject…one which armchair enthusiasts of the period should find of value. This book concentrates on the Nationalist forces. It is the first of a pair of Men-at-Arms titles about the two major forces involved in the conflict. A companion volume will follow focusing on the Republican forces. Previous Men-at-Arms titles have covered the Condor Legion, and the International Brigade. Taken together, these books provide a comprehensive picture of all of the combatants involved in the Spanish Civil War, describing their uniforms, equipment and their rolls in the conflict.

The contents of this book include:

The Spanish Civil War 1936-1939 (1) Nationalist Forces is illustrated with 39 period photos and 28 color plates depicting the various uniforms and personal equipment of the officers and troops, a map of the battlefield and an array of small colorful illustrations by artist Stephen Walsh of various details, badges and insignias.

This book is highly recommended to anyone with an interest in the Spanish Civil War, its causes and the individuals who made up the Nationalist’s coalition. My thanks to Osprey Publishing for providing the review sample and IPMS/USA for the opportunity to review it.