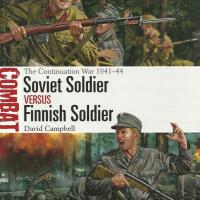 Osprey Publishing continues to expand its “Combat” line, this time with an installment of the Soviet Soldier vs Finnish Soldier during the so-called “Continuation War”, which lasted from 1941 to 1944.

This conflict started a few days after the German invasion of the Soviet Union, when Finland attempted to regain territories lost during the Winter War of 1940. Shortly after the fast advance of the Finnish Army, the military actions turned into trench warfare, with front lines mostly stable until the Soviet Army launched an offensive in 1944, in which the Finnish stopped the Soviet advance but were forced to seek an armistice and switch sides.

This book covers in depth the recruitment, training and morale of the troops, weapons, training, tactics and even leadership skills in each side. There are three chapters, each devoted to a major battle: Sortavala (June-August 1941), Kuuterselka (June 1944) and the critical battle of Tali-Ihantala (June 1944) which blunt the Soviet attack, triggered the armistice and forced the switch of sides by Finland.

The last chapter includes a brief, but clear analysis of each one of the previous three battles and their significance to the overall campaign and strategic situation.

The Finnish-Soviet Wars (Winter and Continuation) are little known in the West. This book -and its accompanying book “The Winter War – Soviet Soldier vs Finnish Soldier”) rectify the situation.

Being easy to read, with clear maps describing the overall tactics employed by each side, supplemented with great color artwork, this book is highly recommended.