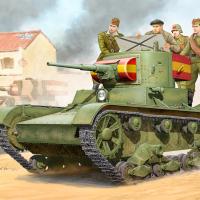 When I first saw this model kit as being available to review for IPMS/USA, I must admit I was ignorant of its importance in the history of tank development and warfare. Developed from the British Vickers 6 Ton tank of the late 1920s, the T-26 series of tanks was one of the most important of the 1930s, and together with the Soviet BT series, provided the backbone of Soviet tank forces in the interwar period. The T-26 was the most numerous tank of the Spanish Civil War, provided a large component of Soviet tank forces during the Finnish/Soviet conflict of 1939-40, and despite falling behind in design compared to improvements in anti tank gun development, was the most numerous tank in the Soviet arsenal when Germany launched Operation Barbarossa in June 1941.

For a relatively small tank, this kit has over 900 parts to it. The green-colored plastic parts are very nicely molded with lots of detail, no flash, and no sink marks or mold ejection marks where they can be seen once the kit is assembled. The individual track link sprues in brown plastic do however have the odd bit of flash here and there, but thankfully (they are very small) no ejection pin marks. Separate track pins are then employed to supposedly make these tracks “workable.” The green plastic parts sprues appeared to have, in some instances, a thin coating of mold release agent present, so I recommend thoroughly washing the sprues in warm water and a good grease cutting detergent to help insure proper paint adhesion later.

Construction starts with the tank’s suspension, and the T-26 employed quite a complex running gear system. The drive sprockets in this kit have 10 parts each. They are made up of six small pins that attach to the inside and outside of the sprocket halves. Care is required to get these into proper alignment. Each side of the tank has four double-wheeled, track-return rollers together with two bogie units on each side, each with four double sets of wheels. Hobby Boss gives you a lot of detailed parts here, which is great, but rather complex. Study the instructions very carefully so that you get everything the right way up, and don’t rush this area of construction. A little patience will pay big dividends when all the small sub-assemblies finally mate up with each other. Having taken my time during these initial construction sequences, steps 1 through 5, everything lined up nicely for me, and a very complex looking running gear turned out to present very few problems.

The T-26 is a rather flat sided vehicle, and the hull superstructure is a series of flat parts that butt up against each other at right angles, with construction covered in steps 5B and 6. Keep a close eye on your angles by using a set square, and again, take your time so that everything works out smoothly for you. There is a lot of very fine detail on this kit, such as the lovely little tow shackles, parts D10, in step 6 of the instructions.

Step 7 has the modeler assembling the tracks. The tracks are made up of tiny little individual track links, each one attached to its own small sprue at two points. A number of these track links had varying amounts of thin flash on my kit. This flash upset the track links’ ability to align with its neighbor properly, unless removed carefully with a scalpel. Even then, and utilizing the kit supplied track assembly jig, I still had a lot of difficulty getting these tracks together. “Workable”?? Not in my book. To my mind the individual track pins are too short in length to give proper strength to the link joints, and I ended up utilizing liberal amounts of Tamiya liquid cement to get the tracks together. Also of note, the track pins are different shapes. Make sure you pay attention to this aspect of the model, or your track pins will look a mismatched mess. Either way, I feel that Hobby Boss really needs to think their approach to tracks through a little better in order to make them more user friendly. This is the second kit of theirs I have built for review, and given the small size of the tracks involved, I feel they need to do one of the following: either A) have you simply glue one piece tracks together with the track pins already incorporated into the track shoes, or B) figure out a smart link and length approach where the top run and lower run of tracks are one long length, with suitable track sag molded in for the top run, and then individual links to go around the drive sprockets and idler wheels. The latter is what I would love to see them do.

The rest of the hull parts assemble together very nicely, and easily, and there are relatively few of them, covered by steps 8 through 10. The fender assembly involves the use of PE parts, and there are no plastic parts provided to utilize as alternatives. This said, those who don’t like PE parts shouldn’t have much of a problem using the PE parts in this kit; they consist almost entirely of parts needing a few simple bends with a set of flat nosed pliers. I left the clear lens, part R1, out of the hull light, leaving them to be installed once the model was completed, painted, and weathered.

Step 11 has the modeler assembling the turret, and for the most part this presented me with very few problems. Make sure, before assembling the main turret shell halves together, that you drill holes from the inside for the radio mast brackets. The radio bracket itself is a very nicely done one-piece molding that needs to be removed from its sprue with great care to avoid shattering it. I utilized a very fine razor saw blade, patience, and care. Doing so, I was able to get it off the sprue and cleaned up without damaging it. The main gun barrel is molded in one piece, and with a little care the mold lines clean up nicely.

I assembled the model into two main sub assemblies: the turret, and the rest. I airbrushed a coat of Mr. Surfacer 1200 primer onto the model to give an even surface over the plastic and PE parts for the paint to adhere to. I then painted the entire model Tamiya XF-69 Nato Black, mixed with a little Tamiya X-22 Clear Gloss. I find that mixing in the Clear Gloss toughens up the paint significantly. For some reason I find matt black paint particularly susceptible to being scratched. It also helps the paint flow easier, and with less chance of clogging my airbrush tip. Following the black, I mixed up a few Tamiya colors to get one of my versions of WW2 Russian Tank Green 4BO (I don’t want all my Soviet models looking the same!): 6 parts XF-73 Dark Green, 3 parts XF-49 Khaki, 1 part XF-4 Yellow Green, plus some X-22 Clear Gloss for the same reason as above. This was airbrushed onto panels leaving large outlines of black, and then a thinner version of this mixture (created by adding more thinner, obviously!) was airbrushed over the entire models to mute the dark outlines, until I was happy with the look of the shadows. I then added some XF-60 Dark Yellow to lighten the main color, and did some panel fading.

Following the color coats, Tamiya X-22 gloss was airbrushed onto the areas where the decals were to lay. Hobby Boss gives the modeler two decal options in the kit; both are Russian Green in color. You aren’t actually told in the instructions which units or nationality the vehicles represent, nor the theater of operations, but from what I know, and can read on the decals, they are Spanish Civil War vehicles. Option 1, the brighter of the vehicles, is a Republican vehicle with bright red and yellow stripes on the turret and hull, along with a large white area with black cross on the roof. While the decal sheet provides small red and yellow stripes for the side hull of the model, the much larger turret stripes in red and yellow, together with the white top with black cross all have to be masked carefully by the modeler prior to applying the paint. I went with the easier second option, a Nationalist vehicle of overall green, and utilized kit decals for all the white markings that you see on the photos of the completed kit. The decals worked just fine, and were well printed with good color saturation. Once these were applied using decal solvent to help them conform nicely, they were left to dry for a couple of days. Tamiya X-22 Clear Gloss was then airbrushed over the decaled areas in a few light coats, and when thoroughly dried was followed by a coat of Mr. Color Flat Clear. The tracks were hand painted using Vallejo track color. The tool handles were also hand painted with Vallejo New Wood. Then pin washes were mixed up using a suitable dark brown color, and also rust, to accentuate the detail around the rivets, and add suitable color to the rear exhaust pipe.

The end result is that the modeler has a very nice looking model of a very important interwar tank. Detail is excellent, and the paint scheme I chose didn’t pose any great masking difficulties. However, due to the very complex suspension and the even more complex track system utilized by Hobby Boss, I would recommend this kit only to someone with a good few models under their belt, and previous experience assembling tracks of this nature. If you pass this test, then the kit is highly recommended! My thanks to MMD-Squadron for providing IPMS/USA with the opportunity to review this fine kit.