Sherman Tanks of the Red Army 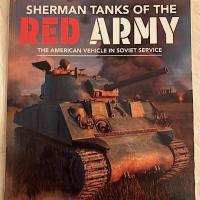 When the words “Sherman tank” are uttered, the first thing that comes to mind for many of us in the US, is Patton’s 3rd Army fighting German Tiger tanks in Northern Africa or his columns of armor racing through Europe after D-Day. The Sherman tank played a role much broader than this and Samsonov has done a very good job explaining the Soviet introduction to, evaluation of, and eventual combat use of the Sherman.

Like any good book, this one gets you thinking beyond generalities. I, for one, was surprised that there was feedback and even some pushback from recipients of armor under the Lend Lease Act. Evidently more than a few people who were fighting back against Germany were not thinking that something is better than nothing. To my surprise, I discovered that the Sherman tank underwent significantly more extended trials by our allies than I had ever imagined, and rightfully so.

The first seven chapters cover the technical background on the Sherman, taking you from the evolution of the M4 from the M3 right through the final models produced in 1945. Although not detailed, there are also plenty of insights when comparing the Sherman to its British counterparts. It’s hard enough to imagine a shoe being equally functional in both the desert summer of North Africa and the frozen winter of Eastern Ukraine, more less a 1940’s era tank. These first chapters of the book discuss such challenges and what resulting alterations to the Sherman were made so it could succeed and, sometimes just survive in these diverse environments. I’ve never put much thought into track design, but Samsonov does a great job discussing this type of topic without losing the reader.

Chapters 8 through 15 give historical accounts of the Sherman in action through the major Soviet offensives of WWII. What the reader quickly realizes is that the Sherman still had many shortcomings regardless of the improvements and evolutions. No matter what alterations were made to components, such as the tracks, plating or engine, the integrity and endurance of these components were always in question. Although there isn’t any specific narrative telling the detailed history of specific tank crews, you can easily imagine and understand the struggle the crews must have had both in maintaining their vehicle and also their confidence in such. The title of the book could have started with, “The Conflicted History of…”

Overall the book provides a good background on Sherman development paired with ample stories of Soviet use during the Second World War. There are ample pictures of tank details, tanks in use as well as a few color plates to keep the modeler interested, while there is plenty of researched content, historical pictures and maps to keep the armchair historian satisfied.

Thank you to Casemate Publisher and IPMS/USA for providing this book to review.