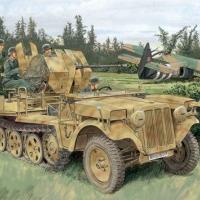 The GermanWehrmacht and Luftwaffe grew into a powerful military machine during the last half of the1930s under Nazi control. They were very well equipped with all the latest and greatest weapons the world had ever seen. When the early weapons and training were tested in Spain confidence grew and then they seemed unstoppable blitzing through Europe at will.

As the war progressed so did the inventory of halftracksthe Wehrmacht and Luftwaffe operated, listing several types and sizes of halftracks each with a specific purpose. Our subject the Sd.Kfz.10 was one of the lighter types. Initially conceived as a utility tow for small towed guns, several different specialist vehicles were based on this halftrack design including Sd.Kfz.10/5, its rear hull was refitted with a purpose-built anti-aircraft platform carrying a 2cm FlaK38 platform. Around 14,000 Sd.Kfz.10 halftracks were built from 1938-45.

A Demag-designed vehicle, measuring 4.5m long with a weight of 4.9 ton and a top speed of 75km/h. Not to shabby.

Germany fielded a whole range of halftracks during WWII, with different sizes for different purposes. The Sd.Kfz.10, one of the lighter halftrack types, was conceived as a prime mover for small towed guns such as the 3.7cm PaK36 and 2cm FlaK30. Measuring 4.5m long and weighing 4.9 tones, this Demag-designed vehicle could carry up to eight passengers. Its top speed was 75km/h. Around 14,000 Sd.Kfz.10 halftracks were built from 1938-45, and the chassis was also used for the Sd.Kfz.250 armored halftrack. Several different specialist vehicles were based on this halftrack design, among them the Sd.Kfz.10/5. This anti-aircraft platform carried a 2cm FlaK38 purpose-built platform on the rear of the hull. Both the Wehrmacht and Luftwaffe used the weapon system.

As Dragon has never produced a kit of this halftrack family before, the body and chassis are brand new. This allowed the design team to really go to town and produce the ultimate detail in this kit, all the while utilizing high-quality engineering for accurate parts. It’s fully detailed, including internal components like the engine and gearbox. Of course, it also makes use of Dragon’s world-famous 2cm FlaK38 kit. Worthy of special mention is the use of slide molds on the front hood to permit the louvers on the hood sides to be fully open. This stunning level of detail, combined with upgraded road wheels and Magic Tracks has resulted in a spectacular halftrack kit. Designed to hit low-flying Allied aircraft, this vehicle will also be a hit with model-makers all over the world!

You are confronted with many option choices I suggest you chart a plan of action as to how you want to do you subject. The build starts out very straightforward and little difficulty is encountered however the instruction sheet is riddled with errors and omissions. Starting at Step one in this step you have two tire options, when completed they are difficult to discern with only slight minor differences in the tread patterns. No recommendations are suggested to aid a decision so I picked the ones I liked.

In step two we find the first missing part from the instruction sheet, You will need to locate part ‘A-72’ and place it on the bottom side of the hull where the steering yoke (A-35) goes into the hull.

Moving on to step 4 part B-41 is mislabeled as B-40, in step 5 partsB-42 and B-52 are mislabeled in reverse also in step 5 B-4 and A-36 are not labeled, moving along to step 9 we start using the photo etch and we find more mislabeling and these tripped me up and causing do-over’s parts MA-3 and MA-4 are called out as MA-2, So please note that the side gates use the MA-2’s and the tail gate (C-14) uses MA-3 and MA-4. And in step 12 parts labeled, as B-60 is really B-65. I may have missed a few others but any competent modeler will be able to figure out what is what. That said I did not detour from the step-by-step instructions as laid out by Dragon.

This kit is a beautiful work of art and design all the parts fall together the only real grip having to clean up what seems to be a million injector stubs.

The ‘Magic Track’ is simple and easy to assemble but requires a timely effort to lie across the suspension wheels and drive sprockets. The other highlights of the build includes the detailed engine and how to pose the hood I wanted to open up both sides as well as the rifle lockers but after toying around with it I went with simple and not to busy. I also decided to open up the gun platform for a less cluttered look. The photo etch gates were a nice feature and test fitting them in the closed position revealed a nice fit. All in all this is an awesome kit with a lot of little fiddly bits to keep you busy for hours on end.

My thanks to IPMS and Dragon model USA. I really enjoyed this fun and challenging kit. I highly recommend it to any competent modeler.