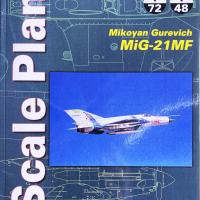 Continuing in their Scale Plans series, MMP Books has released Scale Plans No. 65, covering the Mikoyan-Gurevich MiG-21MF. Consisting of 6 pages, which are each a fold-out set of plans (Nerd Centerfolds, according to my wife) in both 1/72 and 1/48 scales. Opening each set of plans, the book now has 12 pages.

Each set of plans consists of:

Each graphic is meticulous in detail, and printed on heavy, semi-gloss stock. One of the head-on views depicts the drogue parachute deployed, which I found to be an interesting detail to include. For any modeler considering a scratch-building or super-detailing MiG-21MF project, this book(let) is an invaluable asset. Even if you are not, and you just like looking at plans of aircraft, this volume is for you. If you need the scale plans to be in 1/144 or 1/32 scale, it would be an easy task to size them up or down on a copier.

Highly recommended, and a good value as well.

My thanks to IPMS/USA and Casemate Publishers/MMP Books for the review sample.