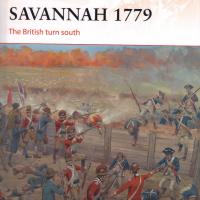 Osprey Publishing’s latest edition in their American Revolutionary War series concentrates on the British invasion of the southern states in 1778, the first move in their "southern strategy".

The June 1778 battle of Monmouth Courthouse, where the Continental Army fought the British to a standstill in New Jersey, was the last large scale battle in the northern states. Withdrawing to New York City, the British strategy then shifted to the southern states, summarized in General Henry Clinton's orders to Lt. Colonel Archibald Campbell in Nov 1778: "Sir, You will be pleased to proceed with the Troops embarked under your Command, and by rapid Movement endeavor to take possession of Savannah in the Province of Georgia....which, if successful, may possibly open the Way for the Re-establishment of Civil Government with the Provinces of Georgia and South Carolina." The southern strategy was premised on first, British naval supremacy that could transport an overwhelming force of 3000 against the Americans, and secondly, the enthusiasm of Loyalists and Native Americans that would double the size of the British force. The strategy was expedited by the French entry into the war on the American side and was flawed in that the number of Loyalists who joined the British (1500), which never met the expectations (6000).

By the end of 1779, Clinton had control of Savannah, and a base of operations to advance on Charles Town, South Carolina. However, the lack of Loyalist support and the inability of the British navy to control the coast due to the French naval intervention and volatile weather would surface again in the 1780 South Carolina campaign.

The book is well organized and filled with illustrations and excellent maps, all providing the reader with a bird's eye view of the battles. A nice touch is the cross section detail of the British Spring Hill redoubt detail, and the many maps, so the reader can always check the geographic whereabouts referred in the text. The chapter on the French-American assault on Savannah in 1779 that resulted in the 2nd highest casualties suffered for the Patriots, is excellent. The table of contents:

An important chapter in the Revolutionary War brought back to life, it is highly recommended for history buffs and modelers. Thanks to Osprey Publishing for the review copy, and thanks to IPMS USA for the opportunity to read and review this book.