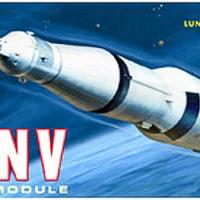 As I sat down to write this review, it was 45 years ago on Sunday, 20 July 1969, at 10:56:15 EDT, that Neil Armstrong set foot on the moon. I watched in complete amazement as the Apollo 11 events unfolded on our old black-and-white TV, from launch preparation to splash down and recovery.

As far as I can tell from some quick Internet research, AMT originally released their 1/200 scale Saturn V Rocket (kit # S945, I think) in late 1969 or in 1970. It has been rereleased a couple times since. This same Saturn V Rocket with Apollo Lunar Module kit launched the most recent reissue in March 2014, courtesy of Round 2 Models under the AMT banner. I would like to thank Round 2 for reissuing and providing this great old, new, kit to IPMS/USA for review.

Like many of Round 2’s rereleases of the old, great AMT kits we all grew up with, the Saturn V Rocket box top has new, colorful art work plus additional colorful photos and historical information printed on a separate panel and glued to the bottom of the box. The black-and-white fold-out instruction sheet is virtually the same as the original. There are 60 parts on seven sprues, molded in white polystyrene, and a new, high-quality decal sheet.

Assembly of this kit is relatively easy and can be done over a weekend even by a novice modeler. Over the last 45 years, I must have built this kit four or five times, and AMT’s old molds still present the same issues they always have. The halves of the first, second and third stages line up fairly well. The joint is just very slightly concave, so a little filler and a little fine sanding take care of that issue. The halves of the Lunar Excursion Module (LEM) descent stage are slightly misaligned, but the way to take care of that is to cut off the alignment pins and align the halves by eye. The most challenging part of the assembly was the Command Module escape tower and the landing legs for the LEM, as these parts were really small. I actually left the footpads on the sprue and glued the legs to the pads, in place. There were a few production tabs left of the inside of the engine end cap (see photo), so these need to be removed or the stage sides will not seat properly. You do have to pay attention during final assembly to make sure that you have the external conduits lined up properly. If you take your time and are careful with the glue and paint, all three stages will hold themselves together with friction and can still be separated to show the engine, Command Module and Lunar Module details.

As I mentioned, the assembly of this kit goes really quickly. However, it will take a lot of concentration and time to line the stages up in order to mask and paint the Saturn V rocket’s high contrast black-and-white paint scheme. The outer surface of this model has more of a serrated or saw-tooth cross-section than a smooth surface with square outer ribs. This cross-section makes it challenging to mask and produce straight lines without bleed through. You will need to select a masking tape made specifically for fine detail work; one that is quite flexible, highly tacky and will not let any bleed under the edges. I used a surface smoothing primer and satin classic white and black paint for the rocket. I used a stainless steel metallic paint for the Command Module and had a slight reaction with primer, so be mindful of the combinations of paint types you use. I used gold lacquer RC car paint for the Lunar Module Descent Stage, and the finish was exactly what I was looking for.

The decals are colorful, sturdy, and go on easily. They are accurate in color and size for the most part, although a couple seem to be a little bigger than 1/200 scale. With this rerelease, Round 2 included decals for the LEM: an American flag, and “United States” printed in white text on a black background. The decals did not adhere very well on their own, but they did respond well, although slowly, to decal solvent. I have had similar issues with decals on other Round 2 MPC and AMT rereleases. It’s not a huge problem, but you have to be patient and work with them carefully. I did switch to a new bottle of decal set that seemed to work a little better, but it still took longer than expected to do its job.

After painting, decals, and final assembly, a final coat of semi-gloss or dull-cote over everything sealed the Saturn V.

The 1/200 scale Round 2/AMT Saturn V with Lunar Module is a simple kit to build and accurately represents one of the most historically significant events in American history. This is a great kit to get kids interested in modeling, and I would recommend it for anyone interested in the history of America’s space program. This kit goes together quickly and can sit in the corner of a table or workbench without taking up much space.

Thanks again to Round 2 Models for providing this great kit for review. Thanks also to IPMS USA for giving me the chance to review it.

Production Tabs to be Removed