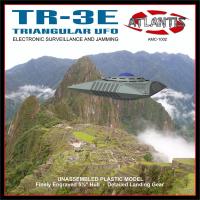 The TR-3E Triangular UFO kit by Atlantis Models has been around for a number of years and has become of staple of the sci-fi modeler’s stash. The design of the kit, which is based upon numerous reported sightings of UFOs, provides flexibility for the modeler to create their own unique take. This reissue is true to the original release.

The kit consists of five parts, which are the upper and lower halves of the ship and three pieces for the landing gear. The details are crisp and well defined. The parts are molded in a silver plastic, so the kit could be built and displayed without paint, if desired.

Closer examination of the kit revealed that there were a few dips in the molding of both the upper and lower halves around the sides. I filled in these areas with a generous amount of CA glue, and then sanded it down with progressively finer grits of sandpaper. The landing gear pieces had mold lines all around it, which I carefully sanded off. These pieces were difficult to hold on to, and I dropped the legs several times while sanding them.

The two halves went together well, but it was a little tricky getting the vents to line up perfectly on all three sides, and it took me a few attempts to get it right. Using Tamiya Extra Thin cement, I assembled the two halves. After it dried, I filled in gaps with Vallejo Plastic Putty. Allowing the putty to dry overnight, I then sanded the joint areas with 400 grit sandpaper, then smoothed it out with 600, 800, and 1000 grit. The edge of the bottom half extended past the top half in some areas, particularly at the corners. These areas were easy to sand down to an even joint.

The landing gear pieces had round tabs that appear to attach to the lower part of the ship, but there were no clear indicators where these were to attach. I measured and marked off the areas where I wanted to attach the legs, and using a 0.42mm drill bit, I drilled holes to these tabs to attach. At this point, I washed all of the parts with a mild dish detergent and allowed it to dry. I then attached the legs with CA glue.

For the purposes of this review, I decided to keep the paint up very simple. I spray painted the model with a few coats of Tamiya Bare Metal Silver. Between coats, I fixed a few places that needed to be smoothed out and filled a couple of minor gaps. After this, I did a minor wash with a charcoal grey over some of the details. I wanted to show that this kit can look great even with a minimal paint job, but there is also plenty of opportunity for customization and detailing. Since the design is only loosely based on reported sightings there is no wrong way to paint it.

The TR-3E is a great kit with a lot of flexibility, and priced at $12.95, it is an inexpensive piece for those on a budget. Its compact design doesn’t take up a lot of shelf space, but it still makes a nice display piece. While there are a few construction challenges, they are minor and easily fixed. It is a must have for any sci-fi modeler.

Thanks to Atlantis Models for supplying the kit for this review.

Dip in the plastic