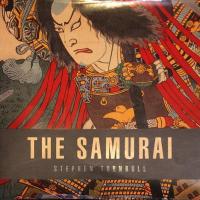 From the Inside Cover

With their deadly curved katanas, colorful lacquered armor and massive bows, the samurai were the ultimate warriors. Bound by their famous code: bushido, the way of the warrior, they were renowned for their martial prowess and suicidal bravery. In this beautiful new book featuring stunning prints, artwork and photographs, Stephen Turnbull explores their history from its earliest origins, through the Gempei War, Mongol invasions and the Period of Warring States to their tragic demise in the modern period with the Satsuma rebellion of 1877. Examining all aspects of samurai life, their homes and strongholds, beliefs and codes as well as their martial upbringing and equipment, Turnbull clears away the myths surrounding these legendary fighters to tell the complete story of history’s most iconic warrior culture.

This book has everything you ever wanted to know the Samurai. This book covers their history, lifestyle, and their arms and armor. Throughout the book there are numerous color photos of really cool armor and battles.

The book is divided into the following chapters:

The Introduction gives a brief overview of the samurai history, from their beginnings as a clan, then through their power struggles, until finally the arrival of the European and American influence. Did you know that “samurai” means “those who serve” in a military context.

The Chronology gives the years that the Samurai are considered to have been established in 710, through their years of existence until finally their demise in 1877 and the Satsuma Rebellion.

The Warrior Lifestyle covers their day to day lifestyle and that they were trained from birth to the station they would hold. It details their dress, housing, food and drink, rest and relaxation, training of their minds including Bushido The Samurai Code, and the martial arts.

The Arms and Armor gives a detail review of the Katana Blade, the Wakizashi (shorter blade), the tanto (dagger), the naginata (long bladed pole arm), and bow. The first guns were introduced from China in 1510 and consisted of a short iron tube fixed to a long wooden shaft. The European version of the gun was introduced to Japan by the Portuguese in 1543. Guns were seen both as a blessing and a curse. The guns helped win battles but were not seen as worthy weapon of the Samurai. The clothing worn under the armor was made from badger skin to eliminate lice infestations. The armor itself was made from small metal plates fastened together with rawhide to form large armor plates. The armor plates were lacquered as a precaution against rust. The complete set of armor consisted of a do (body armor) from which hung a row of kusazuri (tassets) making an armored skirt. Sleeve armor (kote) was worn with large shoulder plates (sode) and a throat protector (nodowa). The armor suite was then completed with thigh guards (haidate) and shin guards (suneate). Face masks (menpo) and helmets (kabuto) were also worn.

The Way of the Samurai is found in death:

Yamamoto Tsunetomo who wrote in the Hagakure that:

“Meditation on inevitable death should be performed daily. Every day when one’s body and mind are at peace, one should meditate upon being ripped apart by arrows, muskets, spears, and swords, being carried away by surging waves, being thrown into the midst of a great fire, being struck by lightning, being shaken to death by a great earthquake, falling from thousand foot cliffs, dying of disease or committing seppuku at the death of one’s mater. And every day without fail one should consider oneself dead.”

The Samurai at War. The samurai could either be the elite guards who inhabited the castle complex or could be full time farmers and part time samurai. It all depended on the professionalism within the daimyo’s system. When the army was ready it would be inspected and would watch and wait as their leader performed a number of rituals of departure. The traditional farewell meal of chestnuts, kelp, and abalone were washed down with sake as the last ritual prior to departure. During the battle the best a wounded man could hope for was that the wound was not serious and could be treated in the field. A seriously wounded samurai would be taken to a house or a temple to recuperate. Medical treatment was either primitive or unavailable though the Samurai did have doctors on the muster list. Rice was the daily staple of the Samurai that was dried and carried. Foraging for local food staples was performed while on campaigns. A Samurai was trained for battle, and the battle was all they lived for. It was rare for a Samurai to be killed with one sweep of the sword since the armor was so good. The Samurai was usually incapacitated due to numerous wounds.

The Strongholds of the Samurai: The Japanese castles were built of timber on high ground since there was a shortage of stone. From the central castle there were a network of satellite castles radiating outwards. These could be anything from simple wooden stockades to impressive castles themselves always built on high terrain.

The Last Samurai details the demise of the Samurai culture during the Satsuma Rebellion in 1877. The Satsuma clan lead a rebellion against the government utilizing a private army having been trained at “private schools”. The Imperial Troops prevailed at the siege of Kumamoto Castle leading to the end of the rebellion.

This book was a great read! I had not had the chance before to research the history of the Samurai.

My thanks to Osprey Publishing and IPMS USA for the opportunity to review this great book.