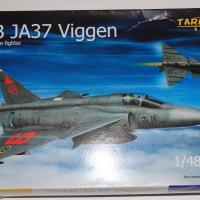 The SAAB JA 37 Viggen was designed during the Cold war to be a rugged short take-off and landing interceptor for the Swedish Air Force. It first flew in early 1967 and production ended in 1990 after 149 airframes were delivered. It has always been a favorite of aircraft enthusiasts and modelers due the distinctive delta wing and canard design. This highly anticipated new kit from the Swedish company Tarangus is the first new kit of this awesome fighter in 1/48 scale since the old ESCI kit from the 80s.

Tarangus is a small Swedish company that specializes in new, beautiful kits of very interesting Swedish subjects. Most of their kits are short run kits but this new Viggen is not. The kit was taken back into development for nearly a year to make mainstream moldings that would be more durable. I am a huge fan of the Viggen so I had high hopes for this kit and it did not disappoint.

Inside the traditional style box there are 7 large sprues molded in light grey plastic and one clear sprue in two large bags. The overall detail on the parts is fantastic. The Viggen was designed to be easy to maintain and has around 100 access door for maintenance. The kit reproduces this look beautifully. The parts are free from flash and molding issues. Any sink marks are well thought out and placed in areas that won’t be seen. My only issue with the packaging was with the parts trees all being packaged together and not individually wrapped. As a result, several tiny pieces that were critical to the landing gear were damaged before I removed them from the bags and I had a few larger loose pieces at the bottom of the bags.

The cockpit is well detailed and for the most part, everything fit really well. It builds into a very nice representation of the busy cockpit, the only thing missing is seat belts. One issue I discovered in final assembly was that that the seat is too wide and too tall to allow the canopy to close without modification. Also for some reason Tarangus molded the seat in two vertical halves with the headrest attached, so this required some filler to disguise the seam. As shown in one of the pictures the parts breakdown and engineering is unlike anything I’ve seen before in an aircraft kit. The intakes go together, then the front fuselage top and bottom halves attach to the intakes. The rear fuselage is built using three pieces, two side pieces and the bottom of the wings. This means that there is no seam along the spine of the kit to sand. I really like this idea for engineering, and it seems to have been done to allow them to produce multiple versions of the Viggen by only replacing a sprue or two. This guess is supported by the extra parts included in the kit. There are two different cockpit tubs, two seats and two different versions of the tail.

Unfortunately, in practice I was never quite able to get the top and bottom halves of the front fuselage to line up properly and I ended up with a fair amount of sanding to fix this issue. I had to reshape the outside of the intakes. As a result I lost some of the engraved details, but I suspect that this was partly my fault for not taking a bit more time to get things lined up, but also due to the complicated nature of the kit’s design for the front fuselage. Even with the reshaping, the fit of the canards was remarkable, my only complaint would be that the attachment points are a bit large and very close to the top edge. This meant that they required some filler to disguise the joint. The only other thing that that I had issues with were the front end of the intakes. The attachment point to the fuselage is very shallow and it joins as a butt joint to the rest of the intake. On my example this meant that I had to do a large amount of filling and sanding to get the interior and exterior seam to disappear.

The kit markings include the three very cool schemes the Viggen wore during its career - (1) bare metal with a red 39 on the tail, (2) the awesome splinter pattern that Viggens are known for and (3) the low visibility grey. But I chose to go a different route when it came to the decals. I had a World Air Power decal sheet sitting around that had the decals to do the final flight Ghost Viggen. This bright red Viggen was too cool to resist, so I had to give it a try. The decals where originally designed for the old Esci kit but performed flawlessly on this version. I used some of the kit decals for the slime lights and they performed perfectly with or without MircoSol. The register was great as well, and really covered up my bright red paint.

As I stated above I had problems with a few of the tiny parts for the gear being broken in my example, luckily I was also reviewing SAC’s excellent gear upgrade so I had replacements. Even so, the kit gear is a fantastic representation of the Viggen’s complicated gear set up. Lastly, as I was doing a museum display aircraft I chose to close the canopy. Unfortunately, as I mentioned above, the assembled seat was too tall to allow the canopy to close, but with some simple sanding I was able to get the seat in the correct place and to get the canopy to close. The clear plastic is very fragile so be careful if you plan to build it open, as the hinges break easily. Also I could not get the canopy to fit quite right, as it appears that the windscreen is slightly too narrow and the main canopy is a little long front to back and a little too short top to bottom.

Despite my trials and tribulations, overall, I love this kit. It is fantastically detailed and fun to build. The parts breakdown is a challenge but the detail and look of the finished model makes the challenge worth it. I finally have my bright red Ghost Viggen and we finally have a modern kit of the SAAB JA 37 Viggen. This kit is highly recommended but beware it can be a challenge.

Many thanks to Tarangus for the review sample and thank you to IPMS USA for the chance to review it.