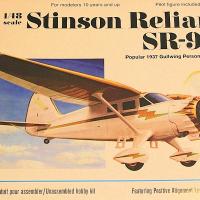 The Stinson Reliant was a popular single-engine, four to five seat, high-wing monoplane manufactured by the Stinson Aircraft Division of the Aviation Manufacturing Corporation of Wayne, Michigan. The Reliant is a three-place high-wing fixed tail wheel land monoplane powered with a variety of radial engines.1,327 Reliants of all types were made from 1933 to 1941, in different models, from SR-1 to SR-10. The final commercial model, the Stinson Reliant SR-10, was introduced in 1938.

A militarized version was first flown in February 1942 and remained in production through several additional versions (all externally identical) until late 1943 for the US and British armed forces. Reliant production can be broken into two distinct types - the straight wing Reliants (all models up to SR-6) and the gull wing Reliants (all models from SR-7 and after including the militarized V-77/AT-19) with there being little in common between the two groups of types. The straight wing Reliant had a wing of constant chord and thickness, which was supported by two struts each side with additional bracing struts. In contrast the taper wing Reliant had the broadest chord and thickness of the wing at mid span, with the outer wing trailing edge heavily angled forward and a rounded cutout on the leading edge root, all supported by a single strut. The taper wing had a significant step up between the fuselage and the wing, and the changes in wing thickness gave it a distinct gull appearance from the front.

The kit is produced by Round 2 Models, a well-known company who bought the AMT Line and is re-issuing the kits in very colorful packaging. The box artwork is outstanding! The scene depicts the Stinson Reliant flying through the sunshine with clouds below.

The kit consists of 32 parts and comes on four white sprues and one clear sprue. The parts are nicely molded and there is a minimal amount of flash. This is to be expected keeping in mind the age of the molds. All panel lines are raised and all the sprues have large gates. The 2-page instruction sheet shows the suggested assembly through 5 steps starting with the cockpit / interior assembly, and progressing through the fuselage, wing, landing gear, and cowl assembly. The clear sprue parts for the front windscreen, side windows, and landing lights are a little thick but fit with no problems.

This kit is a re-box of the older kit. The kit fits together very nicely but filler was required to fill the seam from gluing the two-piece fuselage together. Filler was also required when attaching the wings and stabilizers to the fuselage. I had no problems with gluing together any of the remaining assemblies and additional filler was not required. All the pieces did require a little cleaning up of flash. Again please remember that the molds for this kit are getting old and the flash is to be expected. I built this model as a civilian SR-9 since that was the only decal option. Since these aircraft were used by the military during WW2 for a variety of roles a military version would be a valid option. A pilot figure is included but I did not assemble the figure and install it in the cockpit.

I painted the aircraft overall with Tamiya White, but I did not paint the wings gold as shown on the box art. I did paint the interior a cream color after reviewing a number of interior photos on Google.

The decals are printed within register and lay down with no silvering. But I did find them them to be very brittle. The engine cowl decal was not included in the kit as depicted on the box art.

Overall the kit is a joy to build and builds into a handsome Stinson Reliant SR-9! All that is need is a 1/48 scale 1940’s civilian vehicle and you have a nice diorama. There is some flash but is easily cleaned up with a sharp X-acto blade and some filler was required.