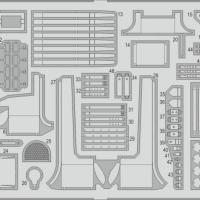 The SOMUA S35 was a French Cavalry tank of the Second World War. Built from 1936 until 1940 to equip the armored divisions of the Cavalry, it was for its time a relatively agile medium-weight tank, superior in armor and armament to its French and foreign competitors, such as the contemporary versions of the German Panzerkampfwagen III. It was constructed from well-sloped, mainly cast, armor sections, that however made it expensive to produce and time-consuming to maintain.

During the German invasion of May 1940, the SOMUA S35 proved itself to be a tactically effective type, but this was negated by the French command's strategic mistakes in deploying the Cavalry armored divisions. After the defeat of France in June 1940, limiting production to a number of about 440, captured SOMUA S35s were used by the Axis powers, some of them on the Eastern Front*.

My friend and fellow modeler Georg Eyerman Provide the donor kit to be used with the review PE item. Here is Georg’s build summery and review.

Hi All. I recently received for review Eduard's photo-etch set from my good friend Chris Graeter. As I had planned on building the Tamiya kit, this was a "just in time" moment. The Tamiya kit is really, really nice. It is light years ahead of the old Heller kit as far as detail and ease of construction goes, although I am not sure how well it scales out. It certainly looks the part! While I have the Airdale Castings kit, I have not built it, so I cannot comment. As an added bonus, you get individual link tracks that snap together. It is totally beyond me as to why Tamiya is the only one out there including snap-together plastic tracks on their kits (you hear that DML, Italeri, AFV Club, etc, etc?). Anyway, the Eduard set is one sheet of 50 or so parts. I used about 3/4 of everything, primarily because I wanted to give the sheet a fair shake. There are some parts, however, that I could not find in contemporary photographs (namely part 1) and this could have been a German add-on or museum fitting for other reasons. There are others, that only elicit a, "why?" You get four lids for the stowage bins in photo-etch, which need to be curved and then folded. Needless to say, these remained on the fret.

The initial steps in the construction have you replace the four fenders of the kit. In order to do so, the kit parts need to be removed. With some judicious cutting and sanding, I was able to remove these parts. The new fenders were then curved with my Mission Models multi-tool (yes, I am that old) and then folded. The parts were adhered with loctite gel super glue. Later, I had to modify the upper hull to fit the lower as the added thickness of the brass parts messes up the fit (which on its own is pretty tight. It took some serious amount of Mr. Surfacer to get everything squared away. I then removed some of the engine hatch handles and replaced them with the photo-etch parts. This was another, "why?" moment, as the kit parts looked fine to me. Some of my reference photos showed casting numbers on the engine hatch doors, so I made mine from some sprue numbers. They might be a little big, but they look the part. I also added two pour plugs present on the rear door of the Aberdeen S-35. Parts that really helped the kit was the latch on the crew compartment door, which looked great when added. Be careful, as these parts are in a prime location to be knocked off if you aren't careful (and I think you can figure out how I know this)! The brackets and straps for the stowage bins do enhance the model nicely, although they are a little fiddly and require that the existing straps and brackets be sanded off. I did make a mistake when I put the brackets on and did not hook them under the bottom rail. Oops! But again, they look the part. It took some fine work to get the straps in place and looking good, but it was well worth the effort. Many of the parts for the suspension covers merely replace molded on detail in the kit. While I did add the bolt strips, which do look nice, I did not play around with the hinges on the small inspection hatch on the sides, nor the inspection plates by the drive sprockets and replaced 3D detail with 2D parts. I did manage to lose one of the steps on the side of the suspension covers and had to thin the kit part down to match the PE part. There was a nice PE bracket to go under the exhaust pipes, which I did use, but not the bracket over the pipes themselves as it would have required carving the existing one off. There is some nice detailing parts for the rear of the hull, primarily for the license plate and the stowage tray. I didn't bother with the license plate parts, but did combine the kit parts and PE parts for the stowage tray. As I planned not to have anything on it, I left off the straps and buckles. Finally, I used the Eduard parts to replace the tool brackets and straps. While kind of fiddly, they do look great when finished.

So how does thing shake out in the end? Considering the quality of the Tamiya kit to begin with, you have to really, really want to tart this thing up. The addition of the fenders throws the fit of the upper and lower hulls off, which makes assembly more difficult. Some of the parts are 2D replacements for 3D details (namely the inspection plates and the engine hatch handles). The door latch and the stowage bin details are nice and enhance the model nicely. The parts for the rear stowage tray and license plate are good and will help to detail this area, but the strap for the tops of the exhaust pipes will probably be really fiddly, although the lower bracket is useful, once modified. Recommended with reservations.

I would like to thank my friend Georg Eyerman for supplying the Tamiya S-35 Somua kit and building the kit using the Eduard PE set and helping writing this review. Finally thanks to Eduard for providing the review PE set.