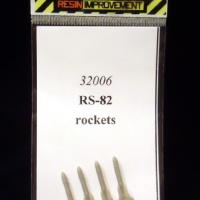 Russian aerial rockets have a fascinating history, and this little creature is very much a part of that history. Design work on this range of weapons began in the 1930s, and they were first deployed operationally during the Battle of Khalkhin Gol, part of the early war animosity between the Soviet Union and the expanding Japanese empire. During this engagement, RS-82 rockets were fired against Japanese aircraft from I-16 fighters, bringing down 16 fighters and 3 bombers – certainly one of the earliest instances of successful air-to-air missile attacks. Later, these same weapons were used in Air-to-ground attacks against hardened targets, such as armor. Investigating further, I’ve found pictorial instances of these being mounted on the I-16 Polikarpov, the Il-2 Sturmovik, as well as Lend-Lease aircraft such as the P-40 Warhawk and Hawker Hurricane. In fact, these little stingers were mounted on virtually every Russian aircraft used during the Great Patriotic War. Sturmoviks alone sometimes mounted as many as 24 for a single mission.

Res-Im Resin Improvement has made a set of 8 very delicately molded resin and photoetch rockets for mounting on the aircraft of your choice. Each beautifully molded rocket has a tiny nose fin which glues over a minute pin. All in all, these are really SMALL rockets about the size of mortar rounds - so much so that I checked and rechecked to make absolutely sure they were really in 1/32nd scale. Indeed they are.

I assembled one to see how the process goes, and must note that you should exercise extreme caution in removing the resin rockets from their casting blocks, as these are attached to the rocket fins, which are scale thickness and very fragile. In addition, the tiny nose fins are easy to lose, so care in handling is required there as well.

However, with proper assembly, you wind up with eight really nicely molded weapons – a more than adequate load for most aircraft. I compared them to the rockets included with the Trumpeter 1/32nd scale Sturmovik, and these are tinier than they are – which is apparently accurate, according to the pictures I found on the internet. I rather wish Trumpeter had done the same thing with the nose fins in their kit, as the Res-Im stand out for that detail alone, if nothing else.

Because of the prevalence of this rocket during World War Two, they can enhance any of a number of 1/32nd scale aircraft, and the simple guide rails are easy to replicate with a little Evergreen strip. Tiny as they are, I’ve found myself really liking them and looking forward to hanging them on something . . . a Hurricane, maybe. I can recommend these with the caveat that assembly requires great care, but the end result is charming.

My thanks to Res-Im for providing these for review and for IPMS/USA offering me a chance to look them over. What fun!

RS-82 Back
Previous Next