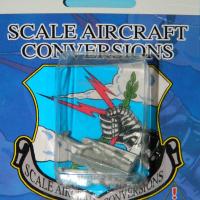 IPMS/USA appreciates the ongoing support from Ross and his team at SAC for supporting the reviewer corps with one more of many monthly releases. These extremely useful and well-thought-out landing gear additions for the modeling community continue to prove their worth. Thanks also to IPMS leadership for sending it for review.

This review is for the SAC landing gear released for the 1/32 Roden. When I learned of the O-1 release a couple of seasons ago, I thought “cool, that surely means they are going to invest in on O-2 as well!” I should be named Claire Voiant, because here in our hands we now have finished the triparty of USAF Forward Air Controller (FAC) aircraft; the OV-10, the O-1, and now the O-2. I don’t see Trumpeter jumping up and down to release the two-seat F-100 in 1/32, (Heck yes I’ll invest in one if they do) so that tells me we will have to do without the “Misty” FAC for a while.

The SAC gear set for the O-2 serves as multiple purpose parts; nose ballast as well as stronger gear. The engine bay provides the engine mount, firewall, the engine crankcase with prop shaft, and the engine mount itself as a starting point; add to that, the all-important nose strut, and the shock strut torque link, and you have metal added as nose weight which is really needed. The remaining part of the set is the vital main landing gear beam. I say vital, because, without the metal structure, the kit plastic will, over a short time splay out and make the model look like a sitting cat with wings and tail appendages.

My pictures show what happens when you use old superglue on a project. I had some serious failures, even with accelerator, in getting things into place. Eventually, I persevered…. But even using new CA is a bit clumsy for some of the parts, as the plastic really needs a lot of preparation work. I spent one evening getting the parts cylinders, starter, generators, magnetos, etc. cut off the runners and cleaned up in preparation before being assembled for the front engine, which is mandatory anyway because it’s visible on the actual aircraft. The metal replacement crankcase accepted the cylinders in short order, but the rest of the parts are rather slap-dash installations, particularly where the flashing on the mold came into play. Lots of that around the rocker heads, but at the end of the fight I had them on the crankcase.

Overall the pictures tell the story of this installation. The main gear beam was the most straightforward part of the installation of the set. Fortunately, nobody tried to copy the dead-cockroach structure, with two gear struts and a central mounting box. On the actual aircraft the gear drops down, and then folds back into the aft nacelle area. It’s a drag-inducer, and interesting to watch on the climb out. It does make for a sporty maintenance effort, as it’s difficult to get the aircraft high enough on the jacks to actually provide clearance for the gear to swing through.

The only parts I wish SAC had included (and are missing here) is metal wing struts, as they are really needed to help structurally on the build and display. The plastic ones tend to bow, as I thought and confirmed when I used the kit parts on the Roden O-1. I’m still trying to figure out how best to do this on my Skysmasher, as resin may not be rigid enough, and metal struts could be a bit heavy. It may be time to insert a wire into the kit parts using a Dremel to hog out a trench in the strut lengthwise, and then insert piano wire into the slot, which ideally would be filled with epoxy. I’ll let y’all see later what I come up with.

As usual, the strength of the gear makes SAC gear worth the extra cost for kit survival; I highly recommend this gear for the robust nose and main gear due to the amount of nose weight you will have to add to get it to sit on the gear. Full marks and thanks again to Ross and his crew for working with us at IPMS USA!