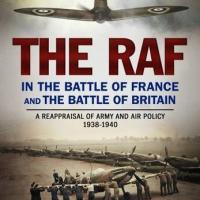 In May 1940, the German Army and the Allied forces they faced were fairly evenly matched. Two months later Britain was on her own, hopelessly outnumbered and facing imminent defeat. Should the RAF have done more to support the Allied armies in France? Could the RAF have protected the British Army better at Dunkirk? How narrow was the margin of victory in the Battle of Britain? Was the RAF ready to deal with an invasion? Why were hundreds of American combat planes and experienced Polish and Czech pilots never used? All these questions and more are answered in Greg Baughen's third book in the series. Baughen describes the furious battles between the RAF and the Luftwaffe and the equally bitter struggle between the Air Ministry and the War Office- and explains how close Britain really came to defeat in the summer of 1940.

Greg Baughen was educated at Sussex University where he obtained a degree in Mathematics. His interest in military aviation was sparked by curiosity over the defeat of British and French forces in the Battle of France in 1940. For many years, he has delved through public archives seeking explanations. The quest has taken him back to the origins of air power in both countries and forwards to what might have been in the Cold War. Baughen is working on a series that will trace the history of the RAF from its origins through to the thermonuclear age.

The chapters in ths book are as follows:

The dangers of Nazi Germany expansion was recognized by the British and French in the mid-30's. The allied military leaders investigated ways to combat a possible invasion. Invest the money and effort into ground forces or air forces? The thinking and concepts that went into deciding on the best aircraft to combat the Germans were strange at best. For a time the RAF felt aircraft equipped with turret was the answer. Turrets with cannon up to 40 mm were proposed. I was dismayed and amazed about how this was going to turn out.

Chapter 2 - The Army Gets the Call.

In 1939 the British army begins to plan for an expeditionary force on the continent. What type of aircraft is required to support the mission? "What's the best aircraft or the mission?" "What's the mission?" "All of the above!!" The idea of a "jack of all trades" aircraft was discussed at length by the powers that be. This proved to be too much discussion and too little action or fruitful planning.

Chapter 3 - The Lesson of War.

The German campaign in Poland offered a good deal of proof on how airpower can influence the outcome of a battle. The British and French were still mired in lessons unlearned. There were more discussions on what aircraft were the best for given tasks. The bi-wing Gladiator was determined to be the "best fighter" thanks to its maneuverability. The Battle became a tactical and strategic bomber. A Spitfire was used successfully as a reconnaissance aircraft. Most telling was the RAF's policy at the time of not using fighters as bomber escorts. Still, many conflicts of personalities here.

The British air staff was unhappy that so many fighters rather than bombers were being built. Initial bombing attacks on German military targets resulted in a high percentage of bomber aircraft losses. In one instance five Hampdens were to bomb German warships and all five were shot down by fighters before reaching the target. Since there was no clue why all five aircraft disappeared air staff concluded the losses were due to flak.

This chapter details the German invasion of Norway and Denmark. The British react by sending troops without air cover or heavy weapons to Norway. While the British did not put much importance on air cover for it ground forces, the Germans did. Lessons in modern warfare were slowly being revealed, but not acknowledged or recognized by the British. The British aircraft carrier Furious was sent to Norwegian waters with its compliment of Swordfish torpedo bombers, however, Furious had no fighter aircraft on board. Needless to say, the Allies withdrew their forces and Norway was eventually lost to the Germans.

The German campaign in the west began on May 10, 1940, with thrusts into the low countries. The Dutch fought valiantly, and at times pushed the Germans back. British air power was requested several times to assist the Dutch army, but often the help did not come. The devastating bombing of Rotterdam brought the realization the battles were lost, and surrender followed.

The German ground forces strike into France with their air power providing the necessary tactical support. The British and French strike back with limited success. The German breakthrough toward the south and the English Channel.

Chapter 8 - The Gloves are Off: The RAF Strikes Back.

How the RAF strikes back is confounding. Bombing the German oil production facilities rather than providing tactical bombing of the invading columns seems the be the best bet in stopping the invasion??? This chapter is a very interesting read.

Lessons from the successful tactics used by the Royal Flying Corps in World War I somehow had been forgotten but were slowly and painfully relearned during the French campaign. The nighttime bombing of German oil facilities was considered as a success by the pilots, but later reconnaissance revealed little to no damage. The British were concerned bombing Germany would result in retaliation on English cities by the Luftwaffe. However, the minimal damage to the German facilities was viewed by the Germans as a bombing error. The British soon realized the French campaign was lost, and now should they abandon their army and save their air forces? One word here: Dunkirk.

The British ground and air forces were withdrawn from the continent, leaving behind their small arms, tanks and other vehicles. Now they were alone. Fighter production was to be increased, but that would take time. The fighters would fight the German bombers, while British aircraft were to bomb the landing beaches. The fear of an impending invasion was overwhelming. Measures were taken to find and equip with bomb racks anything that could be found. Aircraft from the United States that were bound for France and Belgium were diverted to Britain. However, many of the aircraft delivered were deemed unnecessary or inadequate for the work at hand.

Czech and Polish pilots fled to France and Britain to continue their fight with the Germans. But once again these valuable resources were not used to real advantage.

Amid the ongoing conflicts between the British military leaders on how the British air power should be used, preparation to resist an invasion in undertaken.

The Battle of Britain is presented here as many of us may recall from other history lessons, we learn of the losses on both side and the continuing internal battles between the RAF and Air Command personalities. The Polish pilots are finally thrown into the battle and they actually knew how to fight and win!

In this chapter the effects of the German aerial onslaught on Britain is detailed.

The Germans run out of time and good weather to successfully launch and invasion of England and turn to bombing London. Night bombing proves to be the most effective for the Germans as the British aircraft are virtually helpless to intercept and attack. Aircraft equipped with radar may be the only defense, however, the technology of the time must be refined and developed before success can be achieved.

In a few paragraphs, the author summarizes the personality conflicts, poor judgment and failed policies of the British in the last 1930's and 1940. It would almost appear that if the Germans had invaded the British Isles in the summer of 1940 the British land armies, the Royal Navy and RAF would not have been able to resist for long. History would have been much different for all of us.

There is a broad section of images included, featuring RAF personnel, aircraft in flight, plus images of some not well-known aircraft such at the Blackburn B.1/39 bomber plus the less than pretty Hawker Henley. There is also an image of the Vickers Virginia bomber that was to be equipped with 37-mm cannon to hunt German tanks.

This really an amazing and detailed publication of the perilous time the RAF and the English people faced during 1940. The conflicts of personalities, the stubbornness of some leaders, misguided judgments and interpretations, the pride, poor policies and the complete ignoring of the need for aircraft dedicated to the tactical side of warfare resulted in many losses in equipment and lives. Aircraft delivered from the United States was not used until late in the battle, and experienced combat pilots from Poland were ignored again until the end. Foolish pride was almost their undoing. The RAF would not have been able to deal with attacks by the Luftwaffe and a seaborne invasion at the same time. They were stretched to the limit. Only the fall weather and the Germans turning their attention to bombing the cities was the RAF given a reprieve. Great reading!

This is an excellent work of history. For those aircraft and history buffs interested in the early part of World War II air battles this book will offer a wealth of information. It was extremely interesting to read about the various theories of combating Nazi aggression early in the war. I recommend this book as a very enjoyable and informative read.

I wish to thank Casemate Publications and IPMS/USA for the opportunity and privilege of reviewing this publication.