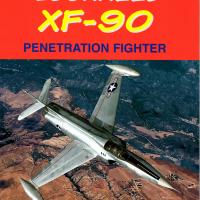 The years following WW II were an era of great advancement in the aircraft industry. Lessons learned from the war, information obtained from the Germans and the advent of the jet engine combined to greatly accelerate development of the industry. During this time, the US Air Material Command issued requests for proposals related to a Penetration Fighter, an All-Weather Fighter and an Interceptor Fighter. Lockheed worked to develop a submission for the Penetration Fighter contract. Their aircraft from the Skunk Works at Lockheed was designated the XF-90.

Steve Ginter has been producing great reference books on Naval Aircraft since 1980 and then around 1999, he added Air Force Legends to the product line. This is the 22nd book in this series and is aimed at the Lockheed XF-90 Penetration Fighter. Since only two examples of the XF-90 were ever built, one would think that this would be a rather thin book. Nothing could be further from the truth. This book covers virtually all the steps in the development and testing of the XF-90 but it also goes into detail on some of the competitors at the time.

For the modeler, there are photos of all the details that we need to make our best model. These include the cockpit, landing gear, wheel wells, color photos etc. Beyond this though, the book covers in detail all the steps needed at the time to develop a modern combat airplane.

This book covers the different ideas that Lockheed investigated for the Penetration Fighter contract. Early proposals for the XF-90 were covered along with sketches of competitor’s aircraft as well. Once Lockheed had decided on the basic layout of the XF-90, the book covers wind tunnel models and details of the structures of the basic components. The XF-90 was designed from the start to utilize afterburners and details of these developments are given. Lockheed designed the ejection seat for the XF-90. Details of this development are shown.

In mid-1949, the first prototype was completed and was shipped, covered in canvas, on a truck to Muroc (later Edwards AFB) for testing. Only two test pilots, Tony LeVier and Herbert “Fish” Salmon ever flew the XF-90 and details of and reasons for many of the flights is given. The book covers in detail Tony LeVier’s flight of May 1, 1950 when he first took the XF-90 supersonic in a dive. Later that month, Tony had to land the second prototype on it’s belly. Again, details are provided.

The second prototype was repaired and flew again but soon, it was determined that the XF-90 would not go into production. The XF-90 was then utilized in an interesting program at the Nevada Test Site of the Atomic Energy Commission. The XF-90 was parked 2200 feet from ground zero of a nuclear test along with other planes to determine the damage inflicted. This plane suffered some damage but has been saved and is in storage at Wright Patterson after some decontamination. It and can be seen today.

The author of this book worked for Lockheed and is very familiar with all the procedures. Probably no one is better able to prepare this book, especially since many of the records were destroyed years ago by Lockheed Martin. It is apparent that this was a labor of love (although the author stated that his favorite airplane was the F-107). The XF-90 was expected to be in production and many other organizations reacted accordingly. Hawk and Aurora released 1/48 scale models of the F-90 in 1952. I remember as a kid building the Aurora kit. The model was much larger than my other 1/48 scale models. The book covers all plastic models that have been produced of the XF-90. The XF-90 also made it into the comic books of the time. The Blackhawks flew the F-90 from 1950 to 1984. Finally, the author claims that a hood ornament on some Oldsmobile models was similar to the XF-90.

I have been a fan of Ginter books for years and I was thoroughly impressed with this latest great reference book from them. I would recommend it to modelers and aviation historians. Anyone who is interested in the details involved in the development of a combat airplane will enjoy reading this book. Well recommended.

My thanks to Ginter Books for providing this to IPMS for review and to IPMS for giving me the opportunity to cover this book.