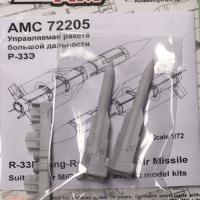 The R-33E missile is a long range air-to-air missile similar to the US Navy’s AIM-54 Phoenix. It is one of the primary weapons of the MiG-31 Foxhound and is believed to have been intended originally for use against the SR-71 Blackbird, the B-1B Lancer and other high-flying targets, but is capable of attacking other targets at long range as well. The MiG-31 can carry 4 R-33’s and its weapon’s system allows it to attack 4 separate targets at once with the R-33s.

Advanced Modeling is apparently a newcomer to the modeling world, but its products are very extremely well researched and molded. This set provides 2 complete R-33E missiles, which are believed to be the most recent variant to enter services with the Russian Air Force. Each missile consists of a missile body with the main fins molded in place with the four guidance fins and a separate exhaust nozzle. There is an additional piece that mounts between the two lower guidance fins which appears to be some sort of rear antenna. There are actually 6 guidance fins for each missile you are provided with both configurations of the upper fins, folded when mounted on the MiG-31 and extended for inflight mode. All of the smaller parts are attached to a single pour stub, one for each missile. The guidance fins are commendably thin and look great, but handle them carefully as they are fragile.

The instructions have a nice exploded diagram showing the location of all of the parts, however it does not clearly explain why there is an extra set of fins or where they go. I did some online research regarding the R-33 and after looking at a number of photos of R-33s installed on the MiG-31, I realized that the extra parts labeled “L” and “R” are the folded upper guidance fins. These fins fold outward at their midpoint to allow for the installation of the R-33 under the MiG-31 fuselage. Once the missile is dropped, the fins straighten out for flight mode.

Like many of the newer Russian weapons, the R-33’s are a mishmash of colors, with much of the missile in various metal shades, with some white thrown in. To keep the smooth texture of the metal sections, I elected to paint the metallic shades first and then paint the white sections last. I used several different shades of Testor’s Metalizer paints for the various parts of the missile body, with Tamiya white for the white sections. I installed the exhaust nozzle and the lower antenna(?) prior to painting, but left the guidance fins off until final construction.

Once each missile had been painted, I gave them each a coat of Future as the set includes a pretty comprehensive set of decals, including 4 sets of serial numbers for the missiles, allowing you to put have all 4 R-33s on your MiG-31 with different serial numbers. The decals are very nicely done and the instructions provide a nice placement guide showing both a top view and a side view of the missile. The only issues I had with the decals is that there is decal film connecting the two larger serial numbers, so you will need to run a sharp Xacto between these before dipping them. The decals responded perfectly to Micro Set and Micro Sol, settling right down over the molded details.

Once the decals were dry, I trimmed off the tiny mounting pegs on the rear guidance fins as there are no corresponding holes on the missile bodies, then mounted them on each missile making sure each guidance fin was aligned with the corresponding main body fin and that the upper missiles were folded outboard for mounting on the MiG-31.

This is a great set and I highly recommend it to anyone building a 1/72 scale MiG-31, however, you will need 2 sets as the MiG-31 carries 4 R-33s. I don’t know the price as this set does not show up on Victory Models website yet, but once it does, I am ordering my second set!

Thank you to Advanced Modeling and Victory Models for the review sample and to IPMS-USA for letting me review it.