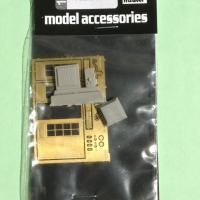 For those who want to try something different, Hauler has created a series of accessories that can be used to complement models of different eras and interests. This set is an old fashioned phone booth that was probably modeled after a 1930s English phone booth as the phone included is the old style phone with a hand held cone shaped earpiece with the cone shaped receiver on the front of the phone itself. The kit is composed of 3 resin pieces (floor, roof and phone) and a photo-etch fret with the four sides of the box, the door, a four-sided roof sign, a two part roof decoration, 2 dials, 2 handles and 4 hinges.

Construction of the phone box itself is very straightforward, requiring just three ninety degree bends and a bit of super glue to attach the left side piece to the back wall. I next attached the completed box to the resin roof to stiffen it and to make sure it was square, then I bent the “telephone: sign and attached it to the roof. I had a bit of trouble getting the rooftop decoration together, as the two parts are to slide into each other and then attach to the four corners of the telephone sign, but I just could not get mine to stay straight up and down and still hit on all 4 corners. In the end I got as close as I could, and in 1/72 scale it is hard to see that one of the corners does not quite touch. I left the floor off for painting and to make it easier to insert the phone later. The instructions do not say what country the phone box is from, but as the sign is in English and it does not look at all like an American phone booth, I assumed it was from England, so I painted the entire phone box and roof with Tamiya Flat Red. I painted the floor a dark brown to simulate a wood floor and then scuffed it up with black and light brown to simulate wear. I left the door off for painting so that I could paint the inside of the phone box easily. I painted the phone itself a semi-gloss black to simulate black plastic. I airbrushed the phone dial white, and then applied a black wash to pick out the holes on the rotary dial. Once the phone was dry, I superglued it to the back wall of the phone box about 2/3 of the way up as the phone was used standing up. Once the phone had set, I attached the handles to each side of the door and then I attached the door to the front of the phone booth. As the hinges on the door are very small and delicate, Hauler provides an extra hinge to make up for the one that is bound to go flying either when you remove them from the fret or as you attempt to get them in the right place. Unfortunately, I managed to launch 3 of the 4 hinges somewhere in my basement, so my phone box does not have any hinges, not that they would show up anyway in such a small model. As a final touch, I dry-brushed white on the raised letters of the “telephone” sign to highlight it.

This was a fun little kit to build and a great introduction to the advantages and disadvantages of photo-etch. I had planned on creating some sort of diorama to show off the phone box, but for the first time in 30+ years of marriage, my wife liked it so much, she asked if she could have it, so it now sits in her display case.

I really enjoyed this kit, despite its small size and highly recommend it.

Thank you to Hauler for the review sample and to IPMS-USA for letting me review it.

Completed and painted kit next to paint jar to provide scale

Closeup opposite side
Previous Next